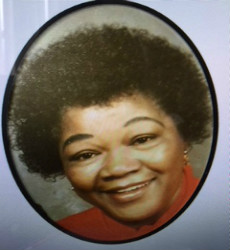 Beatrice entered into her eternal rest Sunday, December 3, 2017 at her daughter's home in Long Branch, NJ at 3:00 am.

Bea spent her younger years in Carbondale where she completed her education requirements graduating from Simmons High School.

Bea accepted the Lord at an early age while still in West Virginia under the leadership of Reverend H. G. Jose of Mt. Zion Missionary Baptist Church.  She served on various committees, the choir, Usher board and as a member of the Sunday School.

Bea moved to New Jersey in 1951 after the passing of her father and to join her mother.  Her faith lead her to Little Pilgrim Baptist Church, Red Bank, NJ.  As a faithful Steward she served on the Usher board, the Senior and Morning choirs, the Willing Workers' Auxiliary, the Church Nursing Unit and President of the Flower Ministry.  Other activities which she took great pride in were providing the Easter lilies and palms for Palm Sunday and decorating the church for holidays especially Christmas.  She adored her pastor, Pastor Porter.

Her work history began at the Black and White Restaurant in Carbondale, West Virginia.  After moving to New Jersey, Bea was employed at Marlboro Psychiatric Hospital for 45 years.  She was also employed at the Monmouth Park Race Track for many years.

She met and married Erving Carr in 1959.

Bea was a ray of sunshine to her family.  In addition to raising her three children, she raised her granddaughter Ebony Carr from a tender age. Chris, her grandson, lived with Nanny and assisted with the care taking of Kenny.  Aunt Bea enjoyed having her nieces and nephews visiting and joking with her.