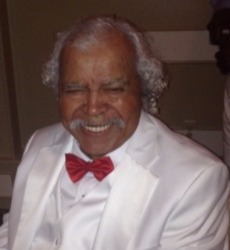 Charles Benjamin Johnson of Eatontown passed away peacefully on Friday May 5th at Riverview Medical Center due to complications from a stroke.  Affectionately known to family and friends as "Chink" or "Pop-Pop," he was born on June 26, 1927 in Metuchen, NJ and was just weeks shy of his 90th birthday.

The son of William and Ethel (Richardson) Johnson lived in Eatontown since he was 5 years old with his 6 siblings.  After school, Chink joined his father working in the Eatontown lumber mill.  He also held positions as a truck driver, was the owner of Johnson & Sons  Trucking Co. and right up until he fell ill worked as a heavy equipment operator driving a bulldozer and other machinery for various companies.  He could often be found in the back yard tinkering with a tractor, lawn mower or snow blower.  He built his house on Maxwell Road in 1953 with his first wife of 51 years Mary and together they had 3 children (Delores Gaskins, Charles Jr. and Stanley). He married his second wife on Valentine's Day in 2001, Willie Bea.

Chink enjoyed traveling, reading the newspaper, following drag racing, barbecuing and spending time with his grand and great-grandchildren. He loved taking his family on cross country drives visiting the states of California, Nevada, Mississippi, Indiana, Tennessee, Florida and Georgia just to name a few.  He also traveled internationally to Switzerland, Puerto Rico and the Bahamas.

He was predeceased by his parents William and Ethel (Richardson) Johnson; his first wife Mary (Williams); brother Herbie and son Stanley.

Family, friends and others whose lives Charles touched are invited to Lawson Funeral Home & Cremation Services to reminisce and support each other.