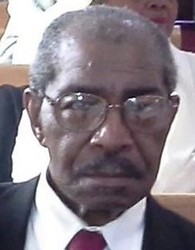 Deacon Clyde Junior Reels, 82 of Hazlet, NJ passed away on September 9, 2018 at Laurel Bay Health and Rehabilitation Center in Keansburg, NJ.  He was born December 7, 1935 in Adams Creek, NC to the late Charlies S. Reels and Atlantic Moore.  He was the oldest of eight children.

Clyde was united in marriage to Dolores K. Lawson and to this union they were blessed with a daughter, Claudia Lynn Reels.  Clyde was employed by the J. Howard Smith Fish Factory, Port Monmouth, NJ and M & S Disposal Services, Middletown, NJ.  After retirement, he was the maintenance supervisor for Second Baptist Church until his health declined.

Clyde was knowledgeable about property maintenance and spent hours maintaining the interior and exterior of Second Baptist Church and parsonage.  He was skillful with his hands and has crafted playground equipment, barbeque pits, furniture, gravestones and flower pots around the home.  He also enjoyed gardening.

I Have A Place In Heaven

Please don't sing sad songs for me,
Forget your grief and fears,
For I am in a perfect place,
Away from pain and tears....
I'm far away from hunger,
And hurt and want and pride.
I have a place in heaven,
With the Master at my side.

My life on Earth was good,
As earthly lives can go,
But Paradise is so much more
Than anyone can know....
My heart is filled with happiness,
And sweet rejoicing, too.
To walk with God is perfect peace,
A joy forever new.