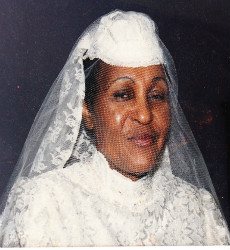 She was raised in Franklinton, North Carolina where, with her family, she attended Mitchiner's Grove Baptist Church and graduated from Albion Academy prior to relocating to New Jersey.

Dora married Pernell Johnson Sr. and from that union ten children were born.  While raising her family, Dora earned her Licensed Practical Nursing Degree from the School of Nursing, Philadelphia, Pennsylvania.  She was later employed by Monmouth Medical Center (ER and Pediatrics); Marlboro State Psychiatric Hospital; and lovingly served many families as a Private Duty Nurse.  Following Pernell Johnson Sr.'s transition in 1971, she married Willie McClendon in 1986.

During her early years in New Jersey Dora became a member of the Red Bank branch of NAACP and the Democratic Committee.  She was also a very active member of the Salvation Army of Red Bank where she kept her children involved as well.  She served as the head of the Home League of Mercy member (nursing home visitation program).  She later became a member of Emmanuel Baptist Church where she enjoyed singing in the Victory Choir.  Dora was a member and beloved mother of Mt. Zion Faith Center where she received both the "Woman of Destiny" and "Outstanding Mother" awards.

Always poised and stunning, Dora was the definition of elegance and grace.  As a young girl, she enjoyed playing piano and continued into her adult years.  She showed love and kindness to everyone, extending her nurturing spirit and becoming a Mother and affectionately "Nana" to many.  Dora was a loving mother who enjoyed spending time with her family, especially playing games with her children.  In essence, most importantly she taught all her children about the saving knowledge of Jesus Christ and lived an exemplary Christian life.