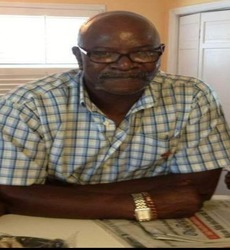 On November 6, 2018 God called his precious marine and told him to come and rest, so Ervin went peacefully home after a long and painful journey. We are so thankful for the life that God gave Ervin.  He loved his entire family especially HIS girls!  He was kind with a gentle spirit and had an immense LOVE for children.  Even though he is gone he will NEVER be forgotten!

Ervin Windell Cannon was born December 31, 1948 to the late George Windell Cannon and Clementine E. Cannon in Craven County, North Carolina.  At an early age, his family relocated to New Jersey where he attended Fair Haven Rumson Schools.  After high school he decided to become a Marine and remained a Marine until he went home to be with the Lord.  After serving a tour in Vietnam he was honorably  discharged and then went on to serve many years in the National Guard.  He was employed as an Iron Worker until he retired in 2009.  Upon his retirement he became an avid bowler, which soon rubbed off on the family as many Saturdays were spent bowling and laughing together.

He was joined in holy matrimony to Glenda Faye Wilson on September 2, 1978.