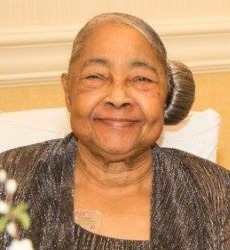 We were blessed and fortunate enough to know and love the beautiful Ida Ruth "Ruthie" Daniels who was called to her forever home on Thursday, August 9, 2018.

Born on September 27, 1942 in Winterville, North Carolina, Ruthie spent the first two decades of her life growing up in the nearby town of Greenville, where she would live until she met the love of her life, Aulander "Buddy" Daniels Sr.  In the year of 1961, Ruthie decided that it was time to relocate to Long Branch, New Jersey with Aulander to begin her new life as a wife and mother.  Not knowing what the future held for her, Ruthie knew one thing for certain, and that was that if she followed God every step of the way, no matter what obstacles came her way in this life, everything would be okay.  Through this path filled with faith, Ruthie not only became a loving mother but a woman that the community could turn to.

Known for making the best sweet potato pie and banana pudding along the East Coast, Ruthie became the go to baker for many friends and family members.  As Ruthie navigated this life, she grew to enjoy not only baking, but spending time playing her casino on the go tablet games, chatting on the phone with her nieces (ALL day long), watching baseball (Go Yankees!), receiving the word of God at her lifelong church of Second Baptist (until she was no longer able), growing plants and laughing on end with her two best friends and nephew; neighbor, Frances Stephens, sister-in-law Elizabeth Gilmore and her nephew Donald "Wayne" Tyler Sr.

Many would describe Ruthie as a loving, encouraging, compassionate and all-around beautiful woman who will be missed dearly.