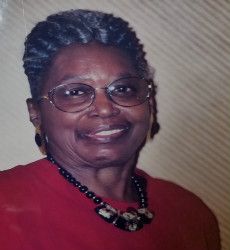 Janet received her education in the New Jersey and Pennsylvania school systems.

Janet met and married a popular saxophone musician, Clarence Sharpe (known as "C Sharp").  From this union, they were blessed with two sons.  The marriage was dissolved and Janet moved from Philadelphia, PA to Keyport, NJ.

Janet returned to school as an adult and received her GED from the NJ Department of Education and in April 1993 she began to work as a certified Home Health Aide and resigned after an automobile accident in November 1996.

Janet became a member of Second Baptist Church, Keyport and was baptized in 1963 by the late Reverend Nicholas Tate.  Janet served as a Sunday School Teacher for the Adult Class and she was an Assistant Bible Study teacher.  She was also a member of the Missionaries and was a loyal, dedicated and committed servant.

In 1997, Janet became a life member in the National Council of Negro Woman, Inc. in the state of New Jersey - North Shore area section.

Janet, a true entrepreneur, started a videography business name "Precious Moments."  She dedicated numerous hours making tapes and DVDs of church programs--weddings, funerals, conferences, anniversaries, birthdays and many other events.  Her greatest joy was distributing her DVDs to family, friends and church members, including churches throughout the NJ Seacoast Association.

Janet had a spectacular eclectic passion for collecting unusual pieces of African artifacts--paintings, books, poems and stories.  Janet loved shopping for bibles and inspirational books and would sit and read for hours.  She was enthusiastic to share what she had learned with others.

Like her mom, Janet enjoyed sewing and became a self-taught professional seamstress.  Janet found sewing to be very therapeutic.  She was able to whip out outfits overnight.  And she became well known for making and designing high quality outfits for family and friends.  She enjoyed modeling her own clothes.  In addition, Janet was very high-fashion minded and enjoyed consignment shopping for eclectic name-brand clothes, estate jewelry and novelty items.