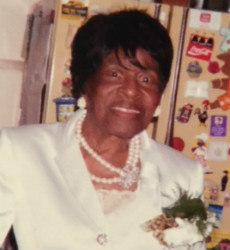 Lula Belle Wilson was born July 1, 1921 to the late Joe and Minnie Brown in Crisp County, Georgia where she was raised and also educated.  In 1943, she was joined in Holy Matrimony to LJ Wilson.

In the late 1940's, Lula Belle relocated to New York City where she learned the gift of sewing.  There, she began work as a seamstress. She later moved to Asbury Park, New Jersey where she joined Mount Pisgah Baptist Church.

In 1950, she relocated to Long Branch, New Jersey where she joined the Second Baptist Church under the leadership of the late Reverend CP Williams.  Lula Belle gave her life to Christ and committed her life to serving him.

Lula Belle attended many of the General Baptist National conventions representing the State Usher Union while also being the longest living member.  One of Lula Belle's passions was for travel.  She visited many countries as well as many cities and states in the US.  The highlight of her travels was when she visited the Holy Land.  She also enjoyed cooking and entertaining her friends and loved ones.

A servant at heart, one of the highlights of her life was when she attended a convention in Missouri.  She was selected by the FBI to escort our former First Lady, Michelle Obama, who was the guest speaker.  She remained faithful in her service to her church and community until her health began to deteriorate.

She leaves to cherish her precious memories one devoted daughter Johnnie M. McDonald of Morrisville, NC; one grandson Craig R. McDonald of Tuckahoe, NY; four great granddaughters; a host of nieces, nephews and devoted friends who loved and cared for her.  With her stern hand, loving ways and her love for our Savior Jesus Christ, she touched many lives and will be missed.