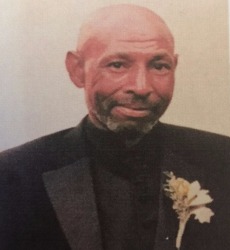 Moses Henry Gaskins of Long Branch passed away at home on Monday July 24, 2017 after a long battle with cancer.  "Big Moe" or "Moe" as he was affectionately known to family and friends was born on January 23, 1945 in Kinsale, a small town in Westmoreland County Virginia.  The son of George and Rosie (Smith) Gaskins he was one of 11 children.  Moe spent most of his childhood growing up in Virginia before moving to New Jersey in his late teens.  He met and married his first wife, Delores (Johnson) in 1967 together they had two children (Charlene Miles and Moses Jr.).

Moe served in the Army in the 1st Infantry Division from 1978 through 1982, while in active duty he was stationed at various locations including Fort Riley, KS, El Paso, TX and Friedberg, Germany.  While serving Moses received the following accolades; Defense Service Medal, Army Service Ribbon, Overseas Service Ribbon, M-16 Rifle Expert and Mechanic Badge.  After serving in the reserves until 2000, Moses retired from the military and became a heavy equipment excavating operator working with J & L Construction and then James Ientile Incorporated.

Moe met and married his second wife, Yvonne (Stovall) and assisted with raising step sons (Sean, Aaron, Darrin and Trevor).  He enjoyed bowling, playing in various softball leagues and was an active member of the American Legion.

He is predeceased by his parents George and Rosie Gaskins, his brother Richard, his sister Grace and his second wife Yvonne.