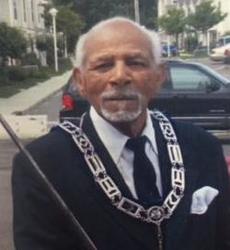 Norman affectionately known as "Cecil" was born in Talbot County Eastern Shore Maryland to the late William (Sr) and Marie G. Mooney.  The family relocated to Long Branch, NJ and Cecil attended Long Branch public schools.  During his high school years, he excelled in basketball and track.  Cecil joined the United States Army in July 1947.  During his tenure he served in the Korean War.  He later retired from military service and began his civilian career as an Engineering Draftsman, at Fort Monmouth NJ.  He worked in this capacity for 48 years prior to retiring in 1993.  In 1956, Cecil married his childhood sweetheart, Ms. Dorothy E. (Puryear) and to that union one child was born, Yvette M. Mooney (Missy).

He was predeceased by his parents, William (Sr) and Marie G. Mooney, brother William (Jr) and sister Joan Scott.

He joined Second Baptist Church at an early age and served in numerous outreach ministries.  He was chairman of the trustee board (emeritus) and a member of the men's choir, church scholarship committee, a vacation bible school instructor, the vbs crossing guard and a meals at noon pantry volunteer.

Cecil had a passion for serving his community and helping others, he received numerous awards/acknowledgements for his service.  He was a member of the following organizations; Past Master Fidelity l\Lodge #42 F&AM, Past Commander in Chief Samuel W. Consistory #50, member of Majaha Temple #47-A.E.A.O.N.M.S.  Founding member of Rev. Dr. Martin L. King Jr. Memorial Guild of Greater Long Branch NJ, the community action board-city of Long Branch and board member of the Long Branch housing zoning board under the administration of former Mayor Henry R. Cioffi.  Cecil also had several hobbies.  His favorite was reading.  One could often find him with a book/magazine in his possession.  He also loved horseback riding, walking, singing, playing golf, attending sporting events and documenting historical events.  As he matured his mind remained razor sharp.  He could always quote scripture, sing a hymn and/or provide the history of Long Branch with accurate facts.

In lieu of flowers donations can be made to Shriner's Hospital for Children or St. Jude's Children's Hospital.