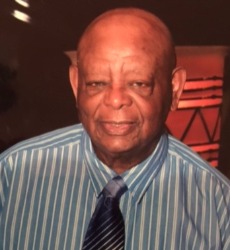 He received his primary education and secondary education at J. Murray Elementary School and Central High School in Charlotte County Virginia.  He served in the U.S. Military as a Marine for four years. He was honorably discharged on May 16, 1966.  He attended Lincoln Tech for automotive technician.  Oscar worked as an auto mechanic, orderly in a local hospital and for several years owned a cleaning service that he operated as a second job with his children.  He ended his work career as a truck driver.

He married Pauline Espy on October 30, 1965.  They lived in East Orange and Edison before purchasing a house in the spring of 1971.  They moved to Tinton Falls, New Jersey with their two children, Valery Ann born July 27, 1967 and Foncele Maurice born May 17, 1971. They lived in Tinton Falls until they purchased their present home in Neptune, New Jersey.

Oscar was founding member and Deacon at Mt. Sion Faith Center of Wanamassa, NJ.  Prior to that he was an Armour Bearer to the late Rev. David Alston at Mt. Carmel Christian Center.

He had a fierce love for his granddaughters.  Oscar did all he could to push and inspire them to do their best, from mandating book reports about black history, to lessons in planting a garden.  He gave a weekly allowance under the guise of hard work and decency at home and school.  Oscar helped train his granddaughters to be outstanding women.  He was their pillar of love and wisdom.

He passed away quietly in the early morning on Sunday, October 22, 2017 at Jersey Shore University Medical Center in Neptune, NJ.  In lieu of flowers, the family asks for donations to the Go Fund Me Account.