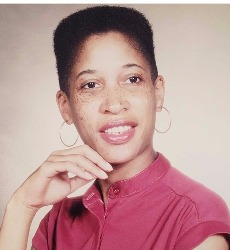 Robyne Loretta Schaffer Baugh, 60, of Red Bank, found eternal peace on Friday September 8, 2017.  She was the daughter of the late Russell and Velma Schaffer.  Robyne was the second of three children born October 10, 1956 in Long Branch, NJ.  She was a loving woman who enjoyed living life to it's fullest with her family and friends.

Robyne was an exceptional student while attending Red Bank public schools, and participating in a variety of activities.  One of her favorite school activities was being a cheerleader for the winning Red Bank Buccaneers football team.  She graduated from Red Bank Regional High School in 1974.  After graduation she continued her education at Kean University, before beginning her thirty year career with the Department of Defense at Naval Weapons Station Earle in Colts Neck, NJ.  Next Robyne, transferred to the U.S. Army Electronics Command, Ft. Monmouth and proceeded to work in the Procurement division, where she received the Commander's Award for Civilian Service.  While working as a Procurement Specialist, Robyne finished her education at Monmouth University, graduating in 2004.  It was during this time, she met and married Raymond Baugh and became a stepmother to Michelle Baugh.

Growing up, Robyne attended Pilgrim Baptist Church with her family, and later joined and was baptized by the late Reverend Dr. Dwight Crist Northington at Calvary Baptist Church in Red Bank, NJ.  Her Christian spirit inspired her to sponsor a child, Asegedech Asrat and her family from Ethiopia, for over twenty years, garnering an award for her humanitarian efforts.  Robyne's giving nature was evident to all of those whose lives she touched.  Robyne's love of reading led her to participate in many book clubs over the years.

Robyne was predeceased by her parents Russell and Velma Schaffer.

In lieu of flowers contributions can be made to the American Cancer Society.  There will be a repast following the service.