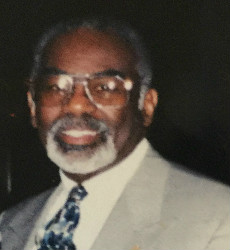 Ronald Leroy Mantley, 83, of Long Branch, passed away on Monday November 28, 2016 at Riverview Medical Center, in Red Bank, New Jersey.  Ronald was born to the late Albert Norris and Caroline Grace Hamilton Mantley on November 29, 1932 in Atlantic City, New Jersey.  He was predeceased by his sister Jeanne Yvonne and his stepbrother Craig Norris Mantley.  Ronald graduated the Atlantic City Public Schools in 1950 and graduated from Syracuse University in 1954.  He received his Masters Degree in Education from Rutgers, the State University in 1964.

Ronald was inducted in the United States Army Signal Corp in December 1954 and served 17 months in Europe.  He was honorably discharged in 1962.

He was united in marriage to Geraldine Williams on November 19, 1955 and of this union, Ronald Leroy and Debra Jeanne were born. In addition to making a home for his family in Long Branch, Ronald faithfully attended Trinity A.M.E. Church, for fifty years participating in many programs including the Male Chorus, the Senior Choir, the Mattie E. Johnson Scholarship Committee, a former Sunday School teacher and the Men's Club.

Ronald was hired as a sixth grade teacher by the Long Branch Board of Education in 1957.  After thirteen years in the classroom he began his administrative career as an administrative intern at the Long Branch Junior High School in 1970, and the following year he was hired as an Assistant Principal there.  In 1974 Ronald was appointed as Principal of the Lena W. Conrow School and in 1986 was appointed as Principal of the Garfield School until retirement in 1997.

Throughout his tenure as an educator, he chaired various curriculum revision committees, assisted in formalizing teacher participation in workshops, national teacher recruitment and seminars for beginning teacher and student relations, as well as initiating teacher sensitivity training at both the elementary and secondary school level.

Over the years, Ronald had been actively involved in the Long Branch community, working in the early seventies as an advisor for the Young Activist, Inc., a group of young men who worked diligently to provide opportunities for the city's youth by serving as a positive role model.  He also served as the part-time director of the Liberty Community Center, instructor of sports activities at the Long Branch YMCA and working as playground supervisor and recreation director for the city's recreation department as a basketball and track official.  Ronald also worked closely with the Monmouth County Cotillion Committee, Inc. serving as chairman of the Scholarship Committee and treasurer.

Ronald is survived by his loving wife Geri of 61 years; his daughter Debra Jeanne Spearman and son Ronald Jr. (Maryclare), two grandchildren Briana and Eddie Spearman and nine great grandchildren and a very special cousin Muriel Greenidge and a host of relatives, former students and friends.