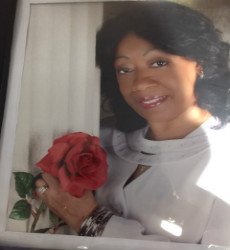 Rosalyn Lewis 74, of Neptune passed away on Wednesday September 14, 2016 at Jersey Shore University Medical Center.  Rosalyn was born January 15, 1942 in Neptune, NJ.  She attended school in Asbury Park but left school early to raise her family.  Rosalyn lived most of her life in Neptune with her husband James Lewis and their four children James A. Lewis, Robert J. Lewis, Michael A. Lewis and Rosanna M. Lewis.  She and James Lewis shared 60 years together.

Rosalyn had a passion for art and fashion.  As a young mother and wife, she taught herself to sew and became the go-to seamstress for the community.  She sewed church robes, chair covers and made alterations for the congregation-never asking for anything because it was a joy to take care of her family especially for the pastor! Rosalyn showcased her talent at flea markets like Collingswood and Englishtown, craft fairs and church bazaars.  She was a known fixture at the yearly Asbury Park Easter Parade, where she wore her designs and was proud to bring home many trophies, prizes and newspaper photos from the pageants.

Later in life, Rosalyn went back to school and received her high school diploma.  In 2011 she graduated as valedictorian of her class.  She was so inspired by learning that she went on to receive her associates from Brookdale Community College and has certificates in Spanish and French languages.  In 2015, Rosalyn was happy to rediscover her love of visual art and took courses at the Neptune Senior Center in painting, pottery and drawing.  Her works were incredible and her confidence soared with each new piece.

Rosalyn always had an upbeat and optimistic outlook while being a steadfast and loyal friend.  Everyone she met always loved her smile which was bright and infectious.  Her warmth and kindness was like a magnet.  Many enjoyed her company and remembered her encouragement, intelligence and support in good times, bad times and times of strife.  Rosalyn also enjoyed community service and was a poll volunteer for the election board of New Jersey from 2009 to 2014.  Her love for travel was inspired by her beautiful friends and family.  Her excursions included Florida, the Bahamas and Maui, Hawaii among other cities.

Rosalyn was a lifelong member of First Pentecostal Church in Neptune, NJ.  During her tenure, she was an advocate for the church and a member of the Abundance Groups spreading the word.  She put her faith in him her entire life.  We are honored and eternally grateful to send her to the Lord amongst family, friends and loved ones from her beloved church home.

Rosalyn is predeceased by her mother and father Ella and Eugene Miller, her son James A. Lewis, her sisters Evelyn Moye and Elizabeth Cauley, her grand-daughters Jamilya and Jasmine Lewis and her niece Katrina James.