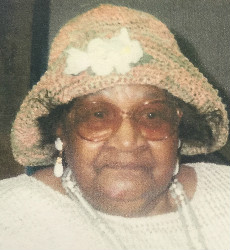 Ruth Elizabeth Lowe Dorchy (better known by her family as "Mama Dear") was short five months of becoming 100 years old.  Born on March 13, 1917 in Moultrie, Georgia, she was the oldest daughter of the late Reverend Stephen and Catherine Lowe.  She attended the Moultrie, Georgia school system, graduating from Moultrie high school and attended college in Albany, Georgia.

In 1937 The Lowe family left Georgia and moved to Lakewood, New Jersey.  After settling in New Jersey, Ruth met and married Andrew Dorchy.  She was the mother of seven children.

Ruth was one of the founders of the Bethel Church of God in Christ, in Lakewood, New Jersey.  She was a faithful and active member of Bethel, serving as the church secretary, Sunday school teacher, Y.P.W.W. teacher, Missionary and many other positions in the church.  In her later years she became one of the church mothers.  In 1950 she opened a Day Care Center at the church that existed into the late 1960's.  She was one of the founders of the Seashore Bible College in Lakewood, where she received her B.A. Degree in Ministry and taught in the school.  She also served on their Trustees Board.

Ruth worked as a volunteer in the Lakewood public schools, in a program called "Follow Through."  This program was an extension of the Head Start Program.  She served on the Parent Committee and the Advisory Board of this program, from the beginning until the program ended.  When the program ended she became a Teacher's Aide at the Spruce Street School in Lakewood.  She also worked with Reverend Anderson to open the first Outreach Library at the John F. Kennedy Community Center in Lakewood.

When the late Reverend Albert Clayton organized the S.W.A.T. (Saints With A Testimony), Ruth along with her pastor Elder Louis O. Rogers, and the Reverend Simpson all joined the march, with her bible in her hand and God walking with her and the others.

For many years, Ruth traveled back and forth, spending her winter months in sunny Florida.  There she worked with the church in the senior citizen's food program.  She also worked in the Head Start program in Crescent City, Florida.  She was a great missionary in both New Jersey and Florida.

In 2005, out of the concern of their mother living alone and getting older, Ruth's children convinced her to move permanently to Florida to live with her daughter Regina and children.  She has enjoyed her latter years in Florida surrounded by her grandchildren and great-grandchildren.  Ruth has especially been blessed by her granddaughter LaNina, who has been a dedicated, faithful and personal caregiver to her grandmother; never leaving her side whether at home or in the hospital.  Her grandson Andrew, and great-grandson Talal has also played a major role in blessing her with "tender loving care."

Ruth lived a long and full life.  On Wednesday, October 26, 2016, in her home surrounded by her loving family, Ruth went to her eternal home to be with the LORD.  She will be truly missed by all who knew her.  May she rest in peace.