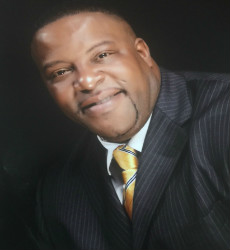 Sean Anthony Macon, 44, of Neptune, passed away into God's loving arms on Friday, December 9, 2016.  Sean was born on August 6, 1972 in Freehold, NJ to Billy Ray Macon and Geneva (Little) Macon-Smith.  Sean was educated in the Asbury Park School System graduating in 1990.  As a student, Sean was well known for his big heart and playing football.  He was a recipient of the Vincent Lombardi Award during his high school tenure.

Sean was a proud alumnus of West Virginia University where he met his wife of 22 years and earned a Bachelors of Art Degree in 1995.  He received his Master's Degree in Social Work in 1997.  In 2015, he received his License for School Social Work from Kean University.  For 15 years, Sean was a School Social Worker for Red Bank Regional High School.  Sean's love for his students and profession was evident in all that he did at RBR.

Sean was the proud husband of Rebecca Lynn Macon and loving father of Toisean Macon, Tiaunna Macon and Verriah Sam Macon.  Sean had a deep love for life, family and friends.  The Macon home was often open for cookouts and the "Notorious Macon's Fish Fry."

Sean enjoyed his football tenure as a Mountaineer playing defensive tackle at WVU.  He often attended many football games and religiously watched his Mountaineers play every weekend.  Sean always expressed his love and passion for every facet of his life.  During his time at Red Bank Regional High School, he developed life-changing relationships with his peers and students he came in contact with.  Sean was a warrior for the youth of RBR.  He always provided a listening ear and motivating words.  Sean developed the Boys to Men Program which united young men, teaching them how to become successful leaders of tomorrow.  He taught etiquette, poise, self-respect and determination to succeed.