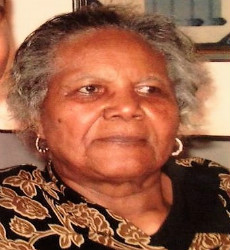 While O.G. was oversees in the Army, Susie worked for the federal government in Washington, DC maintaining files on the soldiers.  She then moved to New York and took a job with the Treasury Department before going to school to obtain training and certification as a Lab Technician.  Susie retired in 1988 from Memorial Sloan Kettering Cancer Center in New York City where she worked as a Lab Technician in the Hematology/Urinalysis Labs for over 32 years. While at Sloan Kettering she became an expert at her craft.  She was indispensable to the hospital and was valuable in teaching other technicians how to do the job.  After living many years in New York, Susie and O.G. relocated to Long Branch, NJ in December of 1970 where they could be close to her dear sister-in-law Erma Crump's family.

Susie's hobbies included knitting, crochet, needlepoint, reading, shopping and gardening.  She was an active member of Trinity AME Church in Long Branch, NJ for 20 years where she served as a Steward, Stewardess, a Missionary and a member of the Lay organization.  She quietly supported Trinity's many projects and organizations in numerous ways including teaching Sunday school.  Her community activities included preparing and distributing food to needy families.  In 2010 at Trinity's 130th Anniversary Celebration, Susie was recognized for her important contribution to the growth of the church.  She has also been honored by the church as an "Unsung Hero" and as "Mother Emeritus."

Her favorite flowers were roses and gardenias.  One of her favorite songs was "He Touched Me" and her favorite scripture was the 23rd Psalm. She is remembered for having instilled the value of hard work and the importance of family to her grandchildren.

Susie departed this life on December 27, 2016.  Preceding her in death were her four sisters Sallie, Lillie, Minnie and Carrie and three brothers Oscar, Willie and Earnest.