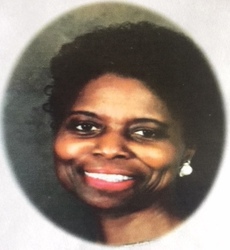 Alma Jean Towler, 78 of Oceanport, New Jersey died peacefully at her home on Wednesday, June 5, 2019 after a brave battle with cancer.

Alma was born on September 26, 1940, in West Point, Georgia to Willie Cliff Hodo and Willie Lean Robinson Hodo.  She attended West Point Public Schools and graduated from Harrison High School in 1958.  After graduation, she moved to Long Branch, New Jersey and lived with her aunt and uncle, Mary Jo and Jerry Morgan.  Alma's uncle Jerry worked for Towler Masonry.  The employer's son, Marvin Towler, hand delivered her uncle's checks to his home, hoping to run into Alma at her bus stop.  Alma married Marvin on August 27, 1961.  Marvin and Alma were married for over 50 years until Marvin's death in 2012.  Their union was blessed with two children, Jennifer and Marvin John.

The bible says, at John 8:32 "and you will know the truth and the truth will set you free."  Alma studied the Bible with Jehovah's Witnesses and felt it was unlike anything she'd heard in her church.  Alma dedicated her life to Jehovah and was baptized as one of Jehovah's Witnesses at Orchard Beach, NY in 1969.  As a decades long member of the North Long Branch congregation, she enjoyed attending her meetings, engaging in her ministry and helping others to know the truth about what the Bible teaches.

Although her husband supported her and took very good care of her, she felt it was important to work as well.  She was employed as a home health aide with Family & Children's Services in Long Branch.  She was eventually promoted to office manager and later retired.  Always committed to helping others, Alma returned to the workforce supporting various agencies including VNA.  In May 1987, in recognition for her many years of service, she received the Home Health Aide of the Year Award from Family and Children's Services and a proclamation from the Monmouth County Board of Chosen Freeholders.

Alma hoped that her family would not weep at her passing away, but rather have a good laugh remembering some of her

way of doing things.  As a mother, grandmother, sister, great grandmother, aunt and friend, her beautiful smile, laugh and genuine concern for others will be missed by all those to whom she was dear.