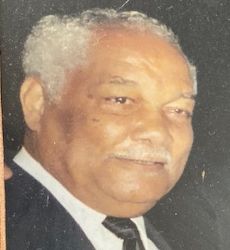 He graduated from Keyport High School in 1950 and joined the United States Air Force.  He served during the Korean War and earned the rank of Sergeant.  Spike was honorably discharged on October 6, 1954.

Returning to civilian life he held many different jobs in several different fields.  He worked as a draftsman for Borroughs Corp. in Philadelphia.  Returning to New Jersey he worked for Hercules in Parlin.  He then worked in the air precipitation control industry for Precipitation Associates and Controlled Emissions.  He was made a vice-president while working in the field.  He then went to work in the school and office equipment where he sold and installed furniture and bleachers.  He was employed by the Walter Braun Company.  Finally he established his own company, Lawson Sales, from which he retired September 30, 2002.

Spike joined Second Baptist Church, Keyport at an early age under the pastorage of Rev. J. Roland Hunter.  He was a layman and coached the boys basketball team.  Spike was a mentor for many young men.  Several of them became like sons to him such as Robert Jameson, Michael Sanks and his nephew James Leroy Lawson Jr.  Spike had an infant daughter, Sharon LaVern and a son Calvin Jr. from his marriage to Constance Ray Craft.

On July 2, 1966 he married Hazel Ellen Francis and they shared 53 years of dedication to each other.  They often traveled and they bowled in a league together.  Together they raised Calvin Jr.  He also raised his niece, Ellen Davenport.  Spike was also a father figure to many other children.

Spike enjoyed being a part of two large families.  He loved it when the families got together and he was surrounded by relatives.  He will be missed by all.

In lieu of flowers contributions can be made to the Second Baptist Church Benevolence Fund.