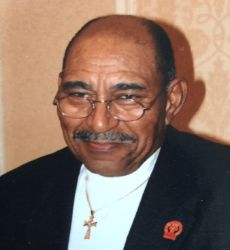 Milton Leroy Jenkins was born on November 27, 1935 to Thelma Jenkins and Lawrence Verdier in Fernandina Beach, FL where he would graduate high school and also become a junior deacon in his local Baptist church.  During his life, he became an avid fisherman.

At the age of 21, he was earning a living as a cook.  He married Estella Frazier in 1957 in North Carolina where they were blessed with Thelma Leona, Darlene Carol, and Melonese Estella in 1957, 1960 and 1961 respectively.  Milton and Estella even played semi-pro basketball during their time there.  Soon they moved to NJ where he worked as a cook for J. Howard Smith Company's young fishermen in the dorms provided on site.  He learned to be a boiler operator from Mr. Spencer Lang who was working for the same company in their boiler room and Milton worked full-time in that capacity for a number of years.  In 1967 Milton and Estella had Barbara Ann and were blessed one last time with Mamie Juanita in 1972.  By this time, Spencer Lang had married Milton's mother Thelma and were living on Powell Avenue in Atlantic Highlands.  In 1972, Spencer and Thelma wanted to move back to Fernandina to retire and Milton had built and owned a home there so Milton bought the home on Powell Avenue and Spencer bought the home in Fernandina Beach, FL.

Milton and his family moved to the house on Powell Avenue in Atlantic Highlands and he lived there until his passing.  Milton also worked full-time for Academy Bus Lines.  After his job at Academy ended, he often worked part-time for Kelly Services.  Once J. Howard Smith Company closed down operations, Milton was contracted to work on Fort Monmouth as a boiler room operator until the government decided to change to a new power system.  Milton continued to work on Fort Monmouth at their "Make It Happen Center" until the base was closed down.

Milton rekindled his personal relationship with God and joined St. Paul Baptist in Atlantic Highlands, NJ.  There he sang in the men's choir, became a trustee, deacon, Sunday school teacher, Sunday school superintendent and custodian.  He was also with the Seacoast Missionary Baptist Association Laymen and the Seacoast men's choir.

Milton transitioned to heaven on October 23, 2019.