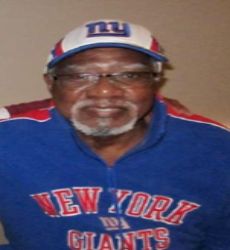 Edward L. Reeves Jr. was born in Orange, NJ and raised in Long Branch, NJ, to the parents of the late Edward Reeves Sr. and Grace Reeves. Ed attended the Long Branch School system and starred in track and football during his high school years.  He was named All County in football as a 128-pound half back in 1948.  Upon graduation, Ed enlisted in the U.S. Army in July 1947.  He was assigned to the 291st Army Band, which was attached to the 24th Infantry Regiment.  The 24th is now known as the "Buffalo Soldiers" and assigned to the 25th Infantry Division.  After serving his country, Ed attended Central State University in Wilberforce, Ohio.  He graduated with a BS degree in Health, Physical Education and Recreation.

For 37 years, Ed was employed by the Federal Government.  He retired in 1985 as the Chief of Computer Operations at Fort Monmouth's, Communications-Electronics Command (CECOM).  Ed became bored with retirement and began to work for Monmouth County as a traffic enumerator.  Ed was never one to stay still, so in his post-retirement he wanted to make a difference in his community.  He accepted the position of Director of the Liberty Street Community Center, currently named the Adam "Bucky" James Community Center.  Ed was relentless in his pursuit to even the playing field for minorities to receive the best education, employment, and services in the community.  For example, in 1995 he marched on the nation's National Mall in Washington, D.C., along with many other black men in Long Branch for our country's landmark Million Man March.

Ed was actively and civically involved with the Greater Long Branch NAACP and the Long Branch Men's Club.

Ed was predeceased by his wife, Joan Adams Reeves, his sister Sandra Reeves Corey and his daughter Lynn Grace Reeves.