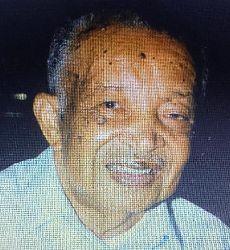 James Brown Sr., 97 of Long Branch, passed away on Wednesday, April 6, 2022, peacefully at home, surrounded by his family.  Born in New Rochelle, New York he was a life long resident of Long Branch.  He was a Caddy at a local country club in New Rochelle in his teenage years.  Later, he was drafted into the Army of the United States.  He received many medals, such as the American Service Medal, Asiatic-Pacific Service Medal, Good Conduct Medal, Philippines Liberation Ribbon, and World War II Victory Medal and was Honorably Discharged in 1946.

He was employed for over 35 years as a Boiler man at the U.S. Army Communications Electronics Command, Fort Monmouth, where he retired in 1983.  After retirement he continued working part-time at the Monmouth Park Racetrack, as a Security Guard, until he retired.

He was a member for over 30 years at Second Baptist Church, Long Branch, NJ, very humble, quiet, always on time and one of the first members to arrive at church every Sunday.

Mr. Brown was 1 of 8 siblings in his family.  He was a devoted family man who loved to cook fried chicken, which was the best, seasoned just right and cooked to perfection.  His favorite desserts were a good Apple pie with lots of apples in it, second was his plain cheesecake.  So of course, his favorite foods were Fried chicken WINGS and French Fries.

He is predeceased by his loving wife Dorothy Brown, his sons James Brown, Jr., Ronald Brown, and Kenneth Brown.  He is survived by his devoted daughter Gwen Brown, Gunter Elliott and son in law Ricky Elliott; grandchildren Curtis Gunter and Malcolm Gunter, who were like his sons, Kenneth Brown, Jr., Ronald Brown, Jr., Brittany Brown, Ashley Brown; great-grandchildren Kenneth and Liam as well as   many loving friends and cousins.