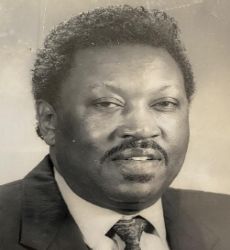 Joseph Clyde Goldsmith passed away on Sunday June 13, 2021 at Jersey Shore University Medical Center, Neptune, NJ.  He was born October 12, 1939 the son of the late John Clinton and Lillie Mae (Babs) Goldsmith in Greenville, South Carolina.  He was educated in the Greenville, South Carolina school system.  Mr. Goldsmith moved from Greenville, SC to Chester, PA where he lived for many years before moving to Tinton Falls, NJ where he resided with his wife of forty-six years Rev. Bernice Althea (Boone) Goldsmith.

Mr. Goldsmith attended Brookdale Community College, Lincroft, NJ.  He was employed at the Pathmark Warehouse in Avenel, NJ.  During his tenure at Pathmark, he was nominated and received the Black Achievers Award.  He worked for over fourty years for Pathmark moving up through the ranks before retiring as a supervisor in 2007.  Bro. Joe as he was affectionately known has been the recipient of various awards throughout his lifetime.