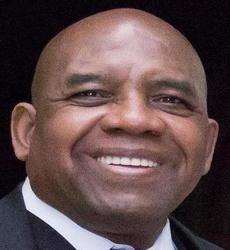 Shortly, thereafter, he moved to New Jersey and worked at General Motors and for the Long Island Railroad System.  Later on, he worked in New York City until he retired in 2013.

Prior to his retirement, he met his Soul Mate, Edith Roach and married her on October 19, 2013; a match made in heaven, which created our blended family.

Russell loved the Lord, his church family and life.  His other passions included, date nights with his wife, holiday gatherings at Aunt Ruth's house, big family cook-outs at Sister's (Deaconess Ethel Palmer's) house, dancing, music, roller skating, movies, sports, vacationing, going for rides with his wife, calling his friends and having fun with his blended family, his sons and grandchildren.  He also loved dining out and meeting new people.  Let's not forget the big smile on his face, whenever he heard Uncle Oscar's deep, sultry voice on the telephone or as he attended one of Collin's theatrical performances or hockey games!

Russell was predeceased by his mother, Louise Lockhart Merritt-Battle; his father, Russell Lee Battle; his brother, Tyrone Battle and his sister, Gloria Smith.