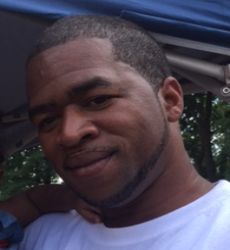 Ryan “Raheem” David German, age 43, fell asleep in death on August 30, 2021, after a short illness. “Ry” as he was affectionately called by his family, was a loving son, a devoted father and a loyal friend to many. He loved his family and always expressed the desire for them to stay close to one another.

“Heem” was a lover of rap music and began writing lyrics at an early age. As he perfected his craft, he aspired to become a star. His music was his life. He loved being in the studio recording his lyrics and enjoyed karaoke. Performing was like breathing to him. Ry was a Raiders fan for life and wore his team’s logo with pride. He began studying the teachings of the Nation of Gods and Earths at an early age and remained just and true throughout his whole life.

Formerly a resident of Red Bank, Ryan attended Red Bank Public Schools. As a resident of Keansburg, Ryan worked as a cabdriver, a job that he enjoyed.  Known for his willingness to always help when he could and his soft-spoken nature, he will be greatly missed by us all, especially his beloved mother Sheila, whom he often turned to and adored.

Ryan is predeceased by his father Gyrie Penn, his grandparents Esther & George German and his aunt Beverly German Turpin.

He is survived by his mother Shelia German, his sister Sandra Drinks, his children Ramel 7, Laila 15 and Yahira 17. He is also survived by his aunts: Loretta German Dickerson, Brenda German, Sharon German, along with a host of uncles, cousins, nieces and nephews and friends. Raheem was the friend of many who are saddened by his passing. Once his friend, friends for life.

The German family wants to thank you all for being a loyal, supportive and always there for him.  Special love and deep affection to Ishaly, Muriel, Melissa and Heather.

A very special thank you to  Ry's favorite cousin Marena German, your support has been priceless.