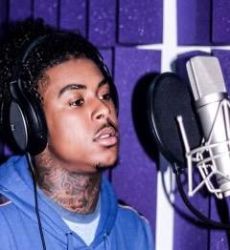 The youngest child and only son of Troy and Evelyn Swift, Troy Darren Swift II was born on July 24, 1995 in Petersburg, Virginia.  He returned to his family's home state of New Jersey at an early age and attended the Manchester Township Public Schools graduating from Manchester High School in 2013.  In high school, he played varsity tennis but his love of music was nurtured while a member of his grandfather's church, Evangelistic Center COGIC.  It was there that Troy received the Lord as his personal savior under the tutelage of his grandfather Pastor Willie L. Swift.  From childhood to adulthood, Troy would develop lyrical skills and singing.

After graduating high school, Troy enjoyed working with his hands as a landscaper and laborer.  He would ultimately find his niche working at True Blue Pools in Toms River, NJ where he would remain until 2019 when a serious motor vehicle accident prohibited him from doing so.

His true passion was his music and he spent countless hours writing and laying tracks in the studio.  He had a desire to enhance these God given gifts and began working on his craft in the hopes of pursuing a career in music.  He developed original recordings both solo and with others and used local venues to share his talent.

In his short life, Troy touched many lives as he was notorious for his million-dollar smile, infectious laugh and love of life.  He was known for his ability to get along with and interface with people from all backgrounds, races, ages and walks of life.  His personality shined through wherever he went and he was loved by all who met him.

Sadly, his life was changed forever on April 7, 2019 when a near fatal accident left him with a traumatic brain injury.  Troy was a fighter and worked hard to recover from serious injuries.  However, he succumbed due to complications caused by these injuries, peacefully at home on September 11, 2021 surrounded by his family.

In Lieu of flowers the family requests that donations be made to the Brain Injury Alliance of New Jersey at  http://www.bianj.org/donate