FUNERAL SERVICE - Wednesday 12-9-2020
The funeral service will be Private
Community Refuge Church of Christ
4 Sobechko Road
Manalapan, NJ 07726
11:30 AM
FUNERAL SERVICE - Virtual Service
Link to Virtual Service will be active from 11:15 am to the end of the funeral service and again at 2:15 pm through the end of the interment service
https://bit.ly/williewalterpaden
INTERMENT
BG William C. Doyle Veterans Memorial Cemetery
350 Provinceline Rd.
Wrightstown, NJ 08562 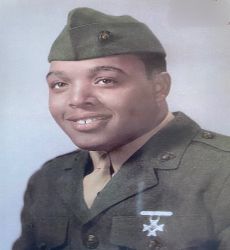 Willie Walter Paden II, 80, went home to be with the Lord on Saturday, November 28, 2020 at Monmouth Medical Center in Long Branch, NJ.  He was born on December 13, 1939, in Concord, North Carolina where he attended Shankletown Elementary School and Logan High School.  At an early age, Willie accepted Jesus Christ as his Savior.  He was predeceased by his loving parents Fannie Louise Brown Paden and Willie Walter Paden I, as well as a younger sister, Netty Carol Cheeks and niece Beverly Rainey.

He was a proud member of the United States Marine Corps.  He was a part of the 2nd Battalion, 2nd Marines, stationed in Camp Lejeunne, North Carolina and traveled the world in service to places such as Guam and Chichijima, Japan.

Willie met the love of his life while working at Mt. Sinai Hospital in New York City.  On May 27, 1966, he married his "tag-team" partner Anna Mae Chisolm (Ann), and that union endured for 54 years until the time of his death.  Ann and Willie raised their three beautiful daughters Michelle, Monique and Memone in Fair Haven, NJ.  They lived there for more than 30 years before retiring to Tinton Falls.  He was the original "girl dad," despite working long hours to provide for his family, he was always present at his girl's sporting events, plays and important milestones in their lives.

Willie worked for the State of New Jersey for 38 years as a Senior Corrections Officer with the Juvenile Justice Commission (JJC), at the Jamesburg Training School for Boys in Monroe Township (affectionately known by him at "Jamesburg").  At the time of his retirement, he was the longest-serving JJC employee in the State of New Jersey.  He also worked part-time for many years at the Department store Bamberger's (Macy's).

Willie lived a charitable life.  He frequently helped people and did kind deeds without the desire for acknowledgment or praise.  Willie was a fun-loving man and seized every opportunity to be the center of his family's attention.  He famously told hilarious jokes and stories around the dinner table.  He was an avid fisherman and found peace at the ocean.  His favorite fishing spots were along the Jersey Shore from Sandy Hook to Long Branch.  He was a world history buff and an avid researcher.  He could fix anything!  He loved dogs, enjoyed cooking, photography and watching television; and was known to quickly end a phone conversation if sports, Jeopardy, 60 Minutes or the 7 o'clock news was airing.  He enjoyed his grandkids and often taught them life lessons and gave them words of wisdom.  He happily trekked to their games and activities.  When they came around he would light up.

He is survived by his loving wife Ann, 3 daughters Michelle Pizzaro, Monique Hutchinson and husband Mark, Memone Crystian and husband Simmee.  He was the loving Pop Pop of six grandchildren Miles Crystian, Jordyn Pizarro, Taylor Crystian, Enoch Hutchinson, Zoe Hutchinson and Matthew Crystian.  He is also survived by a sister Joe Paden as well as a host of heartbroken family and friends.  He will be sorely missed.

Due to Covid 19 restrictions, a private funeral service will be held and officiated by Bishop Fred Rubin.

Notes of condolences may be sent to the family at Mepaden@aol.com