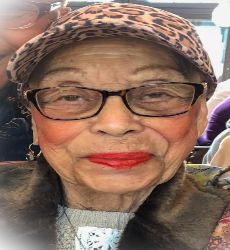 On January 12, 2021, Mrs. Alma Laura H. Penn RN, BS died peacefully at home secondary to cholangiocarcinoma of the biliary tree with metastatic disease to the liver.  She was 98 years old.

Alma was born in Newark, NJ at the Wright Sanitorium, delivered by it's founder, Dr. Thomas Wright, the only hospital where African American doctors could practice and care for their patients in the state of New Jersey.  Alma graduated from Red Bank High School on June 18, 1940 and went on to attend Freedman's School of Nursing at Howard University, Washington, DC, graduating in 1944 with her RN degree' from there she attended New York University, graduating in 1946 with a BS in Nursing.

Alma Laura married William Arthur Penn on July 19, 1952, after initially meeting on the Jersey Shore at the age of 12.  Life unfolded and took a few turns, however, once they reunited as adults, their love blossomed and they welcomed their only daughter, Carol on Christmas Day, 1956.  Infused with a sense of history and purpose shaped by her lived experience of being an African American child growing up in a segregated community, her days colored and shaped by color lines and caste, she poured her life into her community and her family.  Mrs. Penn had a career in Nursing that spanned over 47 years, 44 of those years at Marlboro State Psychiatric Hospital where she became the first African American Director of Nursing in the state of New Jersey and went on to establish scholarships for those seeking to enter the profession of nursing.  She became a founding member of The Monmouth County Business and Professional Women's Council, Inc. in 1950, where she served in several leadership roles but none more cherished than her role as Scholarship Chair, which she held until her death on January 12, 2021.

Quite a socialite, Mrs. Penn was a member of Les Femmes founded in 1959, a ladies social club, originally brought together, just for fun, the ladies soon turned their efforts to involve the community and conducted fund raising projects making donations to such organizations as Deborah Hospital, Fair Haven Council of Boy Scouts, MCOSS Sickle Cell Foundation and to the Red Bank Community Center Pre-School Program.