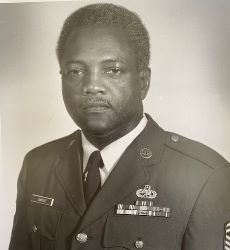 Deacon Alton Simmons, 81 of Neptune, departed this life on Saturday, January 18, 2020 after a long illness.

Alton was born in Amsterdam, GA on June 25, 1938 to Edison and Arsala Simmons.  Alton attended and was educated in the Asbury Park school system and graduated from Asbury Park High School in 1956.  He went on to join the U.S. Air Force shortly after his graduation, where he spent 4 years active duty.  Alton was very proud of being an Airman, he didn't want you to call him a soldier, he would say don't call me no soldier "I'm an Airman."  His hobby was building model airplanes with remote controls flying them with Alicia & Bobby watching them crash and rebuild it again.

Alton reenlisted in the Air Force in 1961, traveled overseas and toured for 1 year.  He returned home to his wife and daughter in 1962.

Alton was a wonderful and very unique person and loved by everyone that knew him.

He was a faithful member of Mt. Olive Holy Temple Church of God in Christ "COGIC' under the leadership of Bishop Martin L. Johnson.  He served as Chairman of the Deacon Board, Vice Chairman of the Trustee Board, Member of The Chosen, van driver, a greeter and a praying man with love for the church and the people.