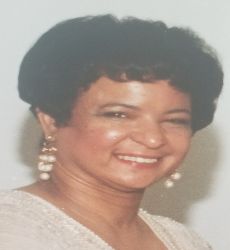 Lloyd and Ivy Trench celebrated the birth of their first-born and only daughter, Cecilia, on August 8th, 1942 in La Boca, Republic of Panama.  Cecilia, much like the Saint, was incorruptible, loyal, incredibly strong and a devout Catholic.  Before coming to the United States in her preteen years, Cecilia grew up in La Boca surrounded by a large family consisting of grandparents, parents, her brother, Muhammed Ali-Salaam (Emilio), several aunts, uncles and cousins who supported, nurtured and showered her with love.

Cecilia along with her family, migrated to the United States in 1950.  Sheepshead Bay Brooklyn, NY was their first landing spot.  Cecilia was initially enrolled at Abraham Lincoln H.S. in Coney Island, later transferring to George Wingate H.S. in the Prospect Lefferts Gardens section of the borough.  Although Cecilia was an outgoing and friendly person, she didn't spend much time socializing with schoolmates, but rather opted to spend most of her time with her family members already residing in Brooklyn.

After several years in New York, Cecilia relocated to Washington, D.C., where she finished her education at McKinley H.S. where she met and eventually married Charles Edward Allen III.  Cecilia and Charles welcomed their only child, Tanya Allen in March 1966.

After H.S., Cecilia worked at Chesapeake and Potomac phone company for years before returning to Brooklyn, NY in 1970.  She eventually landed a job at Chase Manhattan Bank in the Wall St. area, where she was employed for over 25 years.  It was at Chase where Cecilia met her 2nd husband, Francis Ballentine.  The two wed in 1980, while residing in Brooklyn before eventually relocating to Eatontown, NJ in 1989.  They resided in Eatontown for 32 years.

Cecilia was an incredibly warm, extremely loving, fiercely supportive person.  Her smile was infectious and her sense of humor was unmatched.  She relished a good conversation, especially if it called for a belly busting hearty laugh!  She was incredibly loyal and undeniably supportive of anyone that needed her....and even when you did not.

Cecilia will be greatly missed by her family, friends and neighbors.  The huge outpouring of love resulting from her passing is so overwhelmingly telling of how highly regarded and loved she was.  She rests peacefully now and will always be missed but will always grace our lives with her loving spirit forever.

Cecilia's legacy will be carried on by her daughter Tanya Allen-Smith, son-in-law Stephan Smith, grandson Tarin Smith; her brother Muhammed Ali-Salaam, sister-in-law Waheeda Ali-Salaam and a host of nieces, nephews, cousins and other family and friends in the US and in the Republic of Panama.

On this incredibly sad day, we hold Cecilia close to our hearts and pray that her journey is filled with peace.  We are thankful that she once again can see the light that was dimmed for so many of her later years.  Take comfort knowing that she is finally free.  Open your wings beautiful soul and fly!