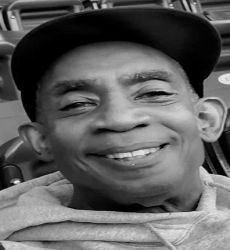 Charles Esmond Pryor peacefully entered into eternal rest on the morning of Tuesday, July 27, 2021, at his home in Eatontown, NJ.  Charles, affectionately known by family as "Douglas" and friends as "Chipper," was born on the 6th of October 1949 in Manhattan, NY to the late Charles Clay Pryor and Lurrlean Pryor.

Charles spent his formative childhood years growing up in the city of New York along with his only sibling Charleé.  This is where he got his primary education, attended high school, and met his wife, Marchelle Minerve; with whom he had two children, Kamal and Kenard.  Shortly after high school, Charles enlisted in the Marine Corp, in which he excelled in the field of Computer Science.  When his military commitment was fulfilled, he focused on his education by attending and graduating from New York University (NYU).  After obtaining a degree, Charles moved to New Jersey and began to lay a strong foundation for the future of himself and his children.  A resident of Eatontown for over 39 years, he worked for AT&T Bell Labs and spent an extraordinary amount of time and effort in raising his two sons.

This was a man who had a passion for life and was committed to self improvement in all aspects of his life.  Since 1988, Charles has been a member of the recovery program, Narcotics Anonymous/Alcoholics Anonymous, and had remained committed to the sobriety of himself and others.  He has counseled, advised, and been a genuine friend to countless people along his journey of life, as of this year August 11th he would be celebrating his 33rd year of being successfully clean and sober.  Charles has always had a love for sports and music, but most of all family and friends; spending endless time visiting and keeping in touch with his network of loved ones.  Caring, friendly, and always with a smile and a positive approach on life, Charles became a shining example of unconditional love to everyone that knew him.

Charles will truly be missed by innumerable friends and all of his family.  He leaves to cherish his loving memory, his sons, Kamal and Kenard Pryor along with his only grandchild, Kahriya Pryor; his sister Charleé O'Reilly; 3 nephews, Sean, Sherard, and Shayne O'Reilly; also a loving brother-in-law Paul O'Reilly and a cherished daughter-in-law Kelly Wallace and a host of cousins.  He has impacted a multitude of lives along his journey.  Charles E. Pryor leaves behind a legacy that any person in the world would be proud of.