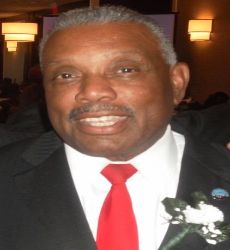 Charles Columbus Wathington, the son of the late Otis and Melissa Wathington, was born on October 12, 1942. He grew up in Cliffwood, NJ, the fourth of ten children. He attended Matawan Regional High School and had an illustrious career as a Huskies football player earned All-Shore, All-County, and All-State honors under the coaching of Barry Rizzo until he graduated in the class of 1962.

After his high school career, Charlie played Semi-Pro football as well as baseball for the Negro Leagues.  He participated in athletics well into his retirement and earned many championship awards during his days on the playing fields.

In 1963, Charlie met the love of his life, Jennifer Dorine Gray, at a fair in Matawan, NJ.  Inseparable they were, as they courted for two years until Charlie asked Jennifer for her hand in marriage in 1965. While planning for their big day, their engagement lasted for two years, and in 1967, adorned in a white gown of peau de soi, Jennifer married Charlie. They were the first couple to be married by Rev. J. Roland Hunter at the Second Baptist Church (SBC) in Keyport, NJ. Excited about their nuptials, the two quickly left for their honeymoon in Bermuda. Six years later, the couple's first and only child was born Dorine Marie.  After 54 years of marriage, Charlie had consistently shown to be a loving and devoted husband and father. He poured everything he had into caring for his wife and daughter.

Charlie's charismatic personality was infectious, and he was always willing to help anyone.  He loved to be with his family and friends. He hardly ever said no because he always looked for the good in people.

Charlie has been a faithful member of the Second Baptist Church of Keyport, serving as a former President of the SBC choir and Chairman of the trustee board. His most memorable gifts were his ability and passion for singing. He sang in the SBC choir and with his brothers, Bill and Otis, called "The Wathington Brothers." Throughout his life, at every church service or birthday party, Charlie was called upon to bless us with his amazing voice.