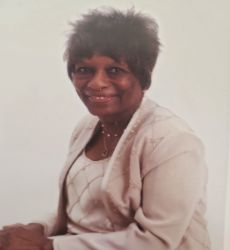 "Dot James," utterly unique!  To know her was to love her!  She was always there to help you, to counsel you, to give you advice, or even give you a piece of her mind!  She did not shy away from confrontation, but you always knew she loved you.  Dorothy Lee "Dot" James was born on July 22, 1934 to David and Sally Mae Smart Jones in Faceville, Georgia.  She lived in Panama City and West Palm Beach, FL, before moving to New York City where she was raised.  She surely sent up her timbers and on March 2, 2021 she went up to live in her house not made by hands!  She praised and served God in song and in deed.  Dot had two sisters, Selma Gilbert and Pearl Santiful, a stepfather Charles Green and a stepbrother Charles "CJ" Green.

Dot attended the NYC public schools and graduated from Theodore Roosevelt HS, Bronx, NY in June 1953.  On graduation day she became the fiancé of Alexander "Count" James.  Dot was always a self-starter and go-getter and worked at various jobs all through her high school years.  Immediately after HS, she enrolled in the Montefiore Hospital School of Nursing in the Bronx and became a Licensed Practical Nurse (LPN).  While he was on active duty in the U.S. Army, Count and Dot were wed on October 17, 1954.  Last October they celebrated 66 years of marriage!  It was their tradition to celebrate each anniversary with a champagne toast.

Dot and Count set up household in the Bronx and were blessed with two children, Audrey Darlene and Gregory Alexander.  Early in her marriage, because of her matchless voice, Dot was offered the opportunity to pursue a professional singing career.  She declined because she wanted to devote herself to her children and her marriage.  Dot pursued her nursing profession while Al worked for the NYC Subway System and attended the City College of New York (CCNY) earning a degree in Electrical Engineering.  He was hired by the Bell Telephone Laboratories in NYC and later transferred to Bell Labs in Holmdel, NJ.  The family moved from the Bronx to Middletown, NJ and were blessed the following year with a second son, Kevin Eric Sammy.  In NJ Dot was mostly a stay-at-home Mom raising her children.  When they went off to college, she decided to pursue higher education as well.  She enrolled in Brookdale Community College intending to upgrade from "Practical Nurse" to "Registered  Nurse" but she developed and interest in Social Work.  After graduating from Brookdale, she went to Livingston College for a Bachelor of Social Work Degree and then to Rutgers University for a Master of Social Work (MSW) degree.  Later, becoming a Licensed Clinical Social Worker (LCSW), she worked for the Monmouth County Board of Social Services, the YMCA, Catholic Charities and finally the Old Bridge School District.  After retirement she worked as a counselor at Brookdale Community College and at Mercy Center in Asbury Park.  She sincerely loved her chosen profession and was an exceptional Social Worker.

After moving to Middletown, Dot found a home at Pilgrim Baptist Church in Red Bank.  She was attracted by the beautiful singing and the warm family church atmosphere.  She joined Pilgrim and after attending alone for a short while, she brought her whole family in.  Dot was prominent in the Women's Ministry, serving several terms as Chair, in the Missionaries Ministry and she co-chaired Pilgrim's Centennial Celebration Committee in 1996.  She was a prolific singer and joined both the Pilgrim Morning Choir and Evening Choir.  When the G&M Ensemble was formed, she sang with them too.  If that were not enough, she joined a traveling singing group, the Alyce Ford Spiritualettes which included the likes of Deacon Jesse Garrison, Deaconess Joan Moore, Grace and Herbert Richardson and Shirley Lewis-Osborne.  After that Dot went on to perform one-woman concerts at St. Paul Baptist in Atlantic Highlands, Calvary Baptist in Red Bank and Zion Baptist in Philadelphia.  She also joined with Deaconess Naomi Coleman from Hackensack, NJ to perform concerts at First Baptist Church North Brentwood, MD.  She loved to sing gospel almost as much as people loved to hear her sing gospel!  In addition to serving her church, Dot also served her community.  She was a member of the Phyllis Wheatly Temple at the Red Bank Chapter of the Elks and was selected to be the State "Songbird" for several years.  Dot was even a part of the Bruce Springsteen 9-11 concert performed at the Count Basie Theater in Red Bank.  Her entire family cherished her singing at the Myers Family Reunion Memorial Services.  She served on the Middletown Board of Human Rights and held elected office as a Democratic Committeewoman in Middletown.  She always assisted in getting out the vote for the Red Bank Democratic Party and loved to help celebrate their victories on election night.

She leaves a legacy of love, service, helping, praise and worship.  Her memory will be forever cherished by her devoted husband, Alexander "Al" James; daughter Dr. Audrey D. James (Edwin), sons Gregory A. (Sharon) and Kevin E.S. James; grandsons Matthew Bernard and Edwin Alexander "Alex" James; Goddaughter Roslyn James Williams and a host of nieces, nephews, cousins and friends.  She loved bantering on the phone weekly with her niece Barbara Shields and enjoyed picking on her nephew Paul Simpson.  She will be sorely missed by her devoted friend, Alice Baker.  In her last years, dementia denied Dot her memory, but it would never diminish her spirit and personality!