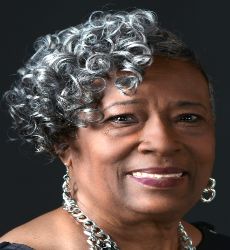 Edith Tonya was born on May 11, 1943 in Augusta, Georgia, to the late Charlie and Lottie Belle Evans.  As an only child, her parents made sure she was exposed to various cultural opportunities including studying piano, jazz, tap, toe and ballet. When she got older, she enjoyed being a majorette. After graduation from Lucy C. Laney High School in Augusta, she attended Morgan State College in Baltimore, Maryland, at the age of 16.

In 1962, she married Robert Jackson. To that union was born two children, LeAndra C. and Chanta L. She was employed by the Richmond County Board of Education in Augusta, Georgia and, in 1966 began her career with the Federal Government working as a Military Personnel Clerk, GS-2 for the US Army 3rd Infantry Brigade at Fort Gordon, Georgia. She relocated with her two, young daughters to Fort Monmouth, New Jersey, in 1968 as a GS-4 Military Personnel Clerk.  During her 32-year tenure with the U.S. Department of Defense, she held various positions, including Education Technician, GS-5 and Education Technician/Counselor, GS-9. In January 1981, she was accepted into the Army Procurement Intern Program, Contract Specialist, GS-5/11.  She completed the intern program in three years and was immediately promoted to Contract Specialist, GS-12.  As a Contract Specialist, she prepared, negotiated and administered complex and sensitive acquisitions from $50K to $260 million.  After 32 years of civil service, Tonya retired in December 1997.

Upon moving to New Jersey, she moved to Long Branch, where she immediately united with Second Baptist Church, Long Branch, under the leadership of the late Rev. C.P. Williams. She was a woman of great faith. One Sunday, the church needed a musician and Tonya volunteered to play. She remained in that position for 35 years – 25 years as Pianist/Director of the Gospel Chorus and 10 years as Pianist/Director of the Mass Choir. Even after she was no longer in an official capacity, she often filled in as a pianist and played regularly for hundreds of funeral and weddings. During her 54 years at Second Baptist Church, she also served as President of the SBC Pathways to the Future, Inc. Community Development Corp., President/Vice President of the Second Baptist Scholarship Ministry, President of Second Baptist Music Ministry, primary musician for the Home Going/Funeral Ministry, and she chaired numerous commemorative events.

In 1972, she married Archie Greenwood Jr. of Long Branch. After that union, a common comparison was made to the hit TV show “All in the Family” characters of Archie and Edith, though Tonya did not use her first name. The family enjoyed many vacations around the country. Since Archie was a teacher in the early years, LeAndra and Chanta had to research and write about each destination in advance of their trip. The two were married for 24 years.

Despite working full time, Tonya went back to college every weekend at McGuire Air Force Base for a couple years to earn her Bachelor of Science degree from Southern Illinois University, Carbondale, Illinois. In addition to her college degree, she was a graduate of the Military Educational Counseling Program, University of Maryland and Fort Lee, VA, and the Army Management Staff College, Fort Belvoir, Virginia. She was also a certified Total Quality Management Facilitator.

Not one to let any ‘grass grow under her feet’, in 1999, Tonya accepted a part-time position with Meridian Health as an Outreach Project Coordinator for the Community and Senior Services Department. The position was supposed to be a one-year grant with the Susan G. Komen Breast Cancer Foundation, but led to a 10-year assignment. In May 2006, Tonya was instrumental in planning and coordinating the Meridian Health Stroke Awareness Luncheon held at the Sheraton Eatontown Hotel.  More than 500 people attended and enjoyed the inspirational message from Evangelist Mary Ida Vandross, mother of the late Luther Vandross and Tonya’s aunt. Tonya also served as Vice President of C&T Creative Services, a publishing and event-planning firm she ran with her daughter, Chanta, for the past 25 years. The company specializes in providing printed materials for non-profits at an affordable price.

A consummate volunteer, if she saw a need that was not being met, she did something about it. Frequently after Monday night choir rehearsal, she would see youth from Grant and Garfield Courts hanging out in the church parking lot. So what did she do?  She established a drill team called ‘Sista’s in Check’ so they would have something productive to do. She paid for uniforms, equipment, entrance fees, and transportation so they could compete all around the Northeast. To them, “Miss Tonya,” was a lifesaver.

She wasn’t just a joiner; she was a doer/leader – a trait she passed on to her daughters. If you wanted something done well, you called E. Tonya. Just ask members of the organizations with which she was affiliated. Among them were: National Council of Negro Women (NCNW), where she served as National Vice Chair, Life Member, Chairperson, 80th Anniversary Celebration, Past National Nominating Committee Member, Past Affiliates’ Luncheon Co-Chairperson, Workshop Facilitator and North Shore Area Section member; Continental Societies, Inc., where she served as Past National President, Past National Vice President, Past Regional Director, Past National Nominating Committee Chairperson and various position in the North Jersey Shore Chapter; National Association of Negro Business & Professional Women’s Clubs Inc. (NANBPWC, Inc.), where she was a Life Member, Past Northeast District Vice Governor, Past National Editor, Past National Nominating Committee Chairperson and Past President of the Central Jersey Chapter;  Blacks In Government, where she was a Life Member, Workshop  Presenter/Facilitator and Nominating Committee Member;  founder and first President of the Fort Monmouth Chapter of the National Association of Black Procurement Professionals; National Museum of African American History & Culture Charter Member; and NJ African-American Arts & Heritage Festival Committee Chairperson;  Charter Member of Meridian Health System’s “Partners In Health;” and she served as the first chairperson for the Monmouth Council of Boy Scouts SCOUTREACH Whitney M. Young, Jr. Awards Banquet, to name a few. Not one to sit back, at the age of 77, she earned the designation of Registered Parliamentarian from the National Association of Parliamentarians, which required her to pass six rigorous exams. She was also a Charter Member of the Monmouth-Ocean County Parliamentarians Unit of the National Association of Parliamentarians.

During E. Tonya’s tenure as National President of Continental Societies, Inc. she implemented many firsts including convening the first National Opening Plenary Session on Capitol Hill; inducting Dr. Dorothy I. Height and The Honorable Alexis Herman as National Honorary Members, organizing the Past National Presidents into an Advisory Council (PNPAC), developing the National Theme “Our Children, Our Commitment, Our Concern,” and formalizing the Continental Guys, giving them an active role in judging chapter displays at Conclave.

She loved to travel, sing and dance and secretly wanted to become a nightclub singer. Her connections were far-reaching. She knew everyone. It was typical to be in another state or even country and have someone who knew her come up to speak. An only child, she was an honorary member of several families, including the Taylors of Red Bank, the Platts of Long Branch, the Puryears of Neptune, the Browns of Jackson, by way of Neptune and Newark, and the family of the late Mary W. Jackson of Hidden Figures fame.

Tonya transitioned peacefully at home on September 12, 2022. She is predeceased by her parents, Charlie and Lottie Belle Evans. She is survived by two daughters, LeAndra C. Ganta of Warren, and Chanta L. Jackson of Neptune; one son-in-law, Rakesh Ganta of Warren; two grandsons, Rohan and Vijay Ganta, both of Warren; two ex-husbands, Robert Jackson of Hepzibah, GA., and Archie Greenwood, Jr. of Tinton Falls; one sister-in-law, Veleda Greenwood of Neptune City; Godchildren, Ina Kennedy of Gable, SC; Brian Kennedy of Asbury Park; Bryce Laguer of Charlotte, NC; Jerell Brown of Burlington; and Made Pierre of Neptune; a host of cousins, NCNW National Board Family, Continental Societies, Inc. National Board & PNPAC Family, club sisters, and friends.  She beautifully touched countless lives and will be mourned by many. 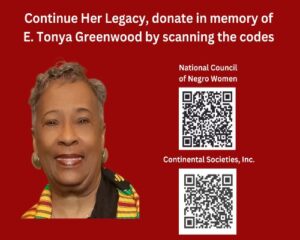