CELEBRATION OF LIFE - Sunday, December 18, 2022
For Service details Please text 646.481.8708, or send an email to cherylsnewventure@gmail.com,
with your full name if you wish to receive additional information. Thank you. 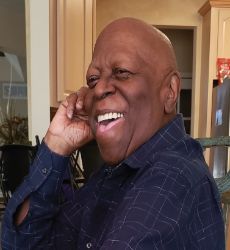 Robert Hilton Mann, EdD, 80, of Tinton Falls, NJ—affectionately known as “Bob”—went from labor to reward on December 11, 2022, while at home surrounded by love.

Growing up at the Jersey shore on River Street, Bob enjoyed swimming, fishing, playing basketball, dancing, and many other outdoor activities; in particular alongside his childhood friend Hampton “Sonny” Andrews. He attended Red Bank Catholic Elementary School, then River Street Public School, before graduating from Red Bank High School in 1959. Upon his graduation from high school, Bob went on to attend Lincoln University in Pennsylvania where he earned a degree in Biology in 1963. It was at Lincoln that Bob pledged Omega Psi Phi Fraternity, Incorporated and became a member of the fraternity’s second chapter, Beta. Bob—aka “Spam”—crossed the burning sands in October 1960 as a member of the “20 Strong” line, eventually achieving Life Member status in the fraternity not long after completing his graduate studies. In addition to being an active member of Omega, Bob was on the university’s yearbook staff and played on the basketball team, while holding memberships in the Glee Club and the NAACP.

After graduating from Lincoln in 1963, Bob went on to begin a successful career in the field of education. His first position was as a classroom teacher in Atlantic Highlands (NJ); followed by a middle school teacher role in Long Branch; next, earning promotions to Vice Principal of Bangs Avenue School (Asbury Park), then Principal of the Bradley School (Asbury Park), eventually becoming Principal of Asbury Park High School. Bob culminated his career as Superintendent of the Asbury Park School system before retiring in 1993.

Bob relished spending time with family and friends. As a young adult, he would attend Omega Psi Phi Conclaves, building upon the spirit of brotherhood and Uplift. After retirement from a 30+ year career in education, Bob would become an active member of the Guardsmen’s New Jersey Chapter, traveling often to take part in ‘Weekends’ around the world.

As gifted as he was an educator, Bob was even better at retirement. He did the most with his considerable spare time in the company of buddies Hank Moore, Jerome Hodges, XL Cotton, and Vince Catanese, just to name a few. Bob was expert at chop bustin’, playing poker, getting in a few rounds of golf, watching his favorite judge shows on television, sometimes winning in his football pool, and hanging out with beloved friends & frat brothers Govan (Sylvia) Thomas and Herb (Nellie) Thomas as they traveled for leisure.

Bob made it his purpose to enjoy life and keep the party going. He was the consummate host. Whether pub crawling with Cheryl or trying out new cuisines with Jordan, Bob Mann’s love of life and laughter will certainly be missed…never forgotten. Raise a glass to Bob.

*~* In lieu of flowers or plants, cards of remembrance can be sent to