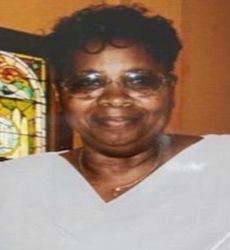 Gracie Mae Dunn (Grace), 80 made a peaceful transition to her new home in glory on December 11, 2022, while recovering at Complete Care at Monmouth in Long Branch, NJ.

Grace was born on July 2, 1942, in Murfreesboro, North Carolina to the late Thomas and Lois Crocker. She was the eldest of four children.

Grace grew up in Severn, NC. and attended the North Hampton County School System. After graduating high school, she relocated to Newark, NJ. She accepted the Lord at an early age. Sometime after moving to Long Branch, she joined Salem Baptist Church, Long Branch. She was a faithful and devoted member of McLaughlin Pentecostal Faith Church in Long Branch. She was a true believer in God’s word, and she demonstrated that through everyone she met.

She worked as a nurse’s aide doing private duty nursing cases for more than 30 years for Stouffer’s Nursing Agency in Long Branch, NJ. She later worked in housekeeping at Monmouth Medical Center where she retired. Grace worked as  a part-time security guard for Long Branch Housing Authority before her health began to fell. She left a good spirit with everyone she met. She was truly loved by many people near and far.

She met and married Lenwood Earl Murphy in July of 1963. From this union there were two children, Cynthia and Denise Murphy. Years later, she married Glenn Dunn in May 1978 and became the stepmother to Gail Lee and Glenda Corbett.

Grace enjoyed traveling and attending the Long Branch Housing Authority events. She loved spending time with her family and the smile she would have on her face when the grand and great grandchildren were around. She used to always say, “Y’all know, y’all need to be in church, and to Cynthia and Denise she would say, “I’ll be the happiest mother if y’all would just get along sometimes.” Everyone always said we know mom/nanny and laughed.

She is preceded in death by her brother, Thomas Crocker, Jr. and granddaughter, Felicia Murphy.