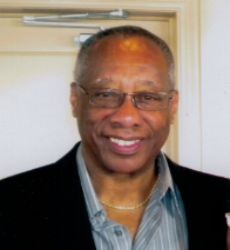 Harry G. Martin Sr. went on to Glory on March 11, 2021 at Jersey Shore University Medical Center in Neptune, NJ.  He was born in Egg Harbor Township, NJ on March 16, 1935, the second of four children of Clarence and Halena Martin.

He was nicknamed "Silent" at Pleasantville High School because he was so quiet and shy.  However, he excelled as a basketball star and was often featured in the Atlantic City Press.  Harry attended North Carolina A & T University on a basketball scholarship and graduated with a Bachelor of Arts Degree.

After teaching in Philadelphia, he was hired by the Federal Government at the Social Security Administration in Atlantic City.  He retired after 40 years of service as an Area Manager in the Neptune Office.

Harry continued playing basketball throughout his life.  He often played with his children's teenage friends who were a fraction of his age.  He travelled with Big Bill's Old Times Basketball Team and all over the country in the Senior Olympics until he was 80 years old.  Harry was a fixture on the courts at Ft. Monmouth, Ocean Township, the Old Headliner, the Boy's Club and Monmouth College.

He was predeceased by his daughter Tina, his parents, his brothers Clarence and Kenneth, son-in-law Elliot and great-granddaughter Makayla.

Harry was a kind, witty and smart man.  But more than anything he was a wonderful father and friend.  He will be missed and remembered always for his soft heart and compassion.

Therefore, my beloved brethren, be ye stedfast, unmoveable, always abounding in the work of the Lord, forasmuch as ye know that your labour is not in vain in the Lord. 1 Corinthians 15:58