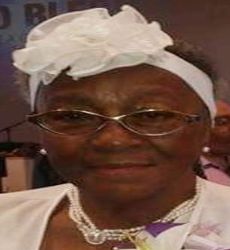 Jacqueline Mooney (Jackie) 91, was born on April 19, 1930 in Aiken, South Carolina. She was the daughter of Walter E. and Annie Chavous Sr. She was the third youngest of eight children. Jackie passed away on August 31, 2021.

Jackie grew up in Aiken, South Carolina and attended the Aiken School system. She later moved to Long Branch where she met her loving husband, Stanley R. Mooney, Sr.

Jackie was employed by the Monmouth County Corrections as a Corrections Officer. She later worked as a Mutual Teller at the Monmouth Park Racetrack. She was an active participant and member of Second Baptist Church in Long Branch.

Jackie’s favorite pastime was Bingo and day trips to Atlantic City. She especially loved her family and her role as Nana. She was a devoted mother and loved all of her children, grandchildren and great-grandchildren. She loved cooking for her family and telling them stories of her growing up.