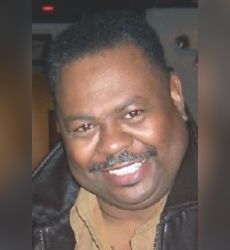 James H. Coefield, Jr. was born to Carrie Verdena Coefield on January 5, 1954, in Buffalo, New York.  Jimmy, as he was affectionately known, and his family relocated to Lakewood, New Jersey in 1955 where he was a student in the Lakewood school system and resided in the legendary Kennedy Apartment complex.

During his youth, Jimmy excelled in football and baseball and was a member of Lakewood’s championship little league team in 1966 while also developing an interest in local and national civic activism.  As a student-leader in Lakewood High School, Jimmy spearheaded a protest regarding a lack of representation of Black professionals in the high school under the banner of the Black liberation flag.  As a result of his effort, the first Black ombudsman in the Lakewood School District, Thomas Ross, Sr., began his tenure with the school system in 1971.  Jimmy graduated Lakewood High School in 1972.

He went on to attend North Carolina Central University in Durham, North Carolina, where he developed many long-lasting friendships and relationships.  Most notable of these was with a young lady from Four Oaks, North Carolina -- the former Pamela Poston.  The two were married on September 30, 1978, at Hickory Grove Disciples of Christ Church in Four Oaks and to this union were born two children: Nikia and Rah’saan, whom he considered his greatest accomplishments.

Jimmy continued his studies at Philadelphia Wireless Technical Institute (“PWTI”) in Philadelphia, Pennsylvania and went on to receive licensure through the federal communications commission (“FCC”).  He was a featured DJ on radio stations at PWTI and Brookdale College in Lincroft, New Jersey.

Jimmy was also the owner of Dimensions Unlimited Disco Experience (D.U.D.E.), a full-service music business, and a popular DJ for weddings and other events around the Jersey Shore and along the east coast.  He was known for his effortless music blending abilities as well as his dry-ice fog machine, allowing newlyweds to be pictured dancing on a cloud, which was a sought-after special effect in the 1980s and 90s.  Jimmy was known for entertaining in his custom nightclub in the basement of his home on Medina Road as well as his very effective Long Island Iced Tea recipe.

He held several positions at Jersey Central Power & Light (“JCP&L”) working his way up from meter-reader and eventually retiring as a Senior Relay Technician in 2014.

In the Lakewood Community, Jimmy will be remembered for being a mentor and role model to young men, particularly those who shared his experience of being the son of a single mother.  He was a dedicated Pop Warner football coach, and supporter of Lakewood High School football. He was also a member of  the Lakewood NAACP  and looked forward to “working the door” at the Annual Freedom Fund Banquet.

Jimmy was a true believer in Jesus Christ.  He loved and believed in the Lord and the power of prayer.  In his later years, he developed a personal ministry of sharing “Daily Devotional: The Word for you Today” with family and friends on a quarterly basis.