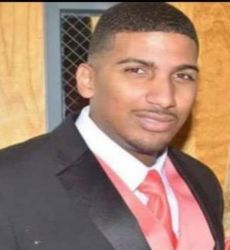 Jamie Jerel George, affectionately known as "Juice," passed away at home on November 30, 2019.  Jerel was born on May 25, 1988 in Long Branch, NJ to the late Miquel L. George and Verna Woodard.  He grew up in Cliffwood, NJ and attended the Matawan-Aberdeen school district before graduating Old Bridge High School in 2007, and then attending West Virginia University.  On November 26, 2016, Jerel wed his best friend, Kelly Davis-George.  Jerel was employed with Seals Eastern, Inc. of Red Bank, NJ.

From a young age, Jerel learned about and cultivated a personal relationship with the Lord.  He loved attending services at Calvary Baptist Church with his wife, Kelly, where he dedicated his life to Christ at his baptism in August, 2018.

In his younger years, Jerel's hobbies and interests included sports of any kind; although his passion was football, he would never turn down a game of basketball at the park or a driveway hoop, boxed throughout his teen years, and would dribble a soccer ball when his nephew took an interest in the sport.  He loved fitness and enjoyed spending time at the gym.  As Jerel grew older, he began to enjoy simple things such as reading, watching the sunrise over Lawrence Harbor, walking the trails at Holmdel Park and going to the beach and standing by the ocean.  Along with his wife Kelly, he would find many activities and day-trips to engage in and explore.  He would often invite his nieces and nephews because he strived to bring family together and to make everyone feel welcome and included.  Jerel loved spending time with his loved ones and lived his life in such a way that he passionately enjoyed any and everything he happened to be doing with his family and friends at that particular time.  Whatever the occasion or activity was, Jerel brought infectious positive energy to it.  Jerel was social, outgoing, funny, charming and had a presence that put people at immediate ease.  He made friends everywhere he went and those friends often became family.  He was known for greeting everyone with a big smile and a big hug; for his fierce loyalty; for his endless jokes and good-natured teasing; for his vibrancy and love of life and for always being himself.  He never left his loved ones without vocalizing how much he loved them.  Jerel's presence has now become the source of priceless joyful memories.

Jerel was preceded in death by his son Jerrell Williams; his father Miquel George; and his uncle Rajohn Williams.