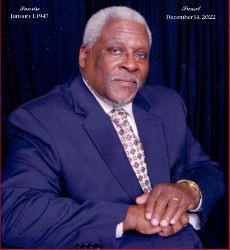 On Wednesday, December 14, 2022, at 75, the Lord called one of his children, Joseph Ronald Seawright, home. He received his wings while his wife, children, brother, and sister were at his bedside.

Joseph was born in New Brunswick, New Jersey, on January 1, 1947, to John Sr. and Charlotte Sams Seawright, the tenth of eleven children. Affectionately called “Jo-Jo” by his parents, siblings, and close friends, he had an infectious smile that could warm even the coldest of hearts! He was the life of the party and often counted on as one of the first people on the dance floor. Like the gentle giant he was, his smooth moves were hard to miss.

Joseph received his education during his formative years through the New Brunswick Public School System. His love of learning was fueled by his interest in sports, mainly track and football, which resulted in him becoming a scholar athlete that continued in college at Allen University. During his athletic career at New Brunswick High School, Joseph was 1964 N.J All -State "High, Parochial & Private School Football 3rd Team." In 1965, Joseph was voted “Mr. Football,” the first African American male to receive the award, and named to the 1965, New Jersey All-State Football Guard Squad. He was also voted "Most School Spirit" by his peers during his senior year.

While attending Allen University, Joseph pledged the Beta Rho Chapter of Kappa Alpha Psi in 1968. He was a standout athlete on both the Football and Track teams. Joseph was often called "Sugarbear" by his line brothers and "Seawright" by those that adored him on campus. He was an ongoing member of The Spartan Club.

After graduating from Allen University, Columbia, S.C., in 1969 with a Bachelor of Arts Degree, he continued his educational pursuit by attending Rutgers University School of Social Work. He received a master’s degree in social work with a concentration on Community Organization in 1971. He served faithfully in the N.J. Air National Guard from 1969-1977 and he was awarded the N.J. Merit Award and a Bronze Star Oak Cluster. Joseph loved interacting and working with people! Over the years, his professional positions included these agencies and organizations: Pediatric Social Worker, Children’s Hospital of Philadelphia, the United States Department of Labor, holding the federal grade of GS12, Certified School Social Worker, Asbury Park Housing Authority and served over 25 years as National Organizer for the American Federation of Government Employees.

In 1973, Joseph met the former Rosalind Ogburn at The College of New Jersey while attending a Valentine’s Day dance where he served as an advisor to a “Kappa Line.” They married a year later and were married for 48 years. They enjoyed traveling, attending various social events, spending time with their children, Travis and Kendyl, and spending time with their close friends, the Smiths, Moores, and Peters families. His love of sports also led him to serve as a soccer coach and athletic mentor for both children during their school years.

Often referred to as “Mr. and Mrs. Couple;” he and his wife, Rosalind, could always be seen together working on volunteer activities for organizations such as Planned Parenthood, Girl Scouts, NAACP, MCAC-DST, Salvation Army and the Jersey Shore (NJ) Chapter of the Links, Inc. Joseph’s fraternal, religious, civic, and social involvement included being a member of Second Baptist Church, Long Branch, N.J., the Asbury Park/Neptune Chapter of Kappa Alpha Psi Fraternity, Associate of Jack & Jill of America, Toms River Unit of the NAACP, Circle-Mate of the New Jersey Circle-Lets and Connecting Link of the Jersey Shore (N.J.) Chapter of the Links, Inc.