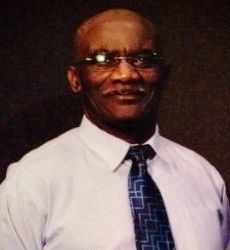 Mr. Lawrence Mitchell Richardson Sr. transitioned on January 9, 2020 after putting up a valiant fight against cancer.  He was born on November 23, 1948 in Guntown, MS, to Lonnie and Ella Mae (Young) Richardson.  He married his best friend and the love of his life, Miya Richardson on January 19, 1980.  They created a home in Long Branch, NJ where they raised their children.

Lawrence was raised in Baldwyn, MS. Upon graduation from high school, he received a scholarship to attend Mississippi Industrial College (M.I.C.) in Holly Springs, MS.  Lawrence excelled academically at MIC and was elected student body president during his senior year.  After graduating from MIC in 1971, he volunteered to go to Vietnam, serving as a Military Police Officer while in the Army.  In 1973, he returned to the United States and relocated to NJ to start his federal civilian career at Fort Monmouth.

Lawrence worked for 37 years in Federal and civilian service as a Supply System Analyst, Chief of Material Management, Budget Analyst and Logistics Manager.  He was a beloved supervisor, team member, mentor and co-worker.  He received numerous awards and recognition for his professional accomplishements during Desert Shield/Desert Storm, Operation Iraqi Freedom and throughout his career at Fort Monmouth and later with EPS Corporation.

Lawrence was devoted to his family and known as the favorite Uncle Mitchell and Uncle Larry.  He spent his free time taking road trips and cruises with his wife.  He was a lifelong fan of the New York Knicks, enjoyed working on home improvement projects and spending time tending to his yard and gardens.

He was preceded in death by his parents and siblings Lester, Leroy, Lonnie and Annie Margaret.