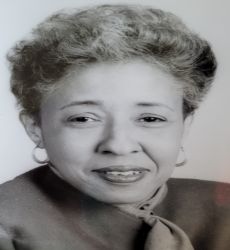 Marie was the only child to Evelyn Howard and Clifford Hawkins.  Raised in Sumter, South Carolina, Marie would grow to become close to her grandmother Adelaid Howard whom she described as "the sweetest most ladylike woman you would ever want to meet" and grandfather Rev. Arthur Howard.  Having been a school teacher Marie's mother instilled in her the importance of education, while her grandfather introduced her to Christ.

Marie excelled in school, graduating high school at age 16, she attended Clark college (her mother's Alma Mater) for her Bachelor's and went on to receive a Masters of Social Work degree.  Continuing to following in her mother's footsteps she became a member of Delta Sigma Theta Sorority Inc.

Moving to Philadelphia, PA, Marie met her husband, Samuel Nelson.  They would settle in Middletown, NJ to raise their 2 children, Darryl and Scott.

Marie was a Training Supervisor with the Monmouth County Division of Social Services, having retired after over 30 years of service.  Additionally, she taught as an adjunct professor with Monmouth University and NJ prison system.

She was a founding member of the Monmouth County Chapter of Jack & Jill and remained involved with the organization through the Jersey Shore Chapter.

She had accepted Jesus as her Lord and Savior and was a beloved member of the Foundational Truth Bible Study Ministries.

Left to honor her memory are her husband, Samuel Nelson, 3 children: Andre Bell, Darryl Nelson and Scott Nelson, 4 grandchildren along with a host of family and friends.