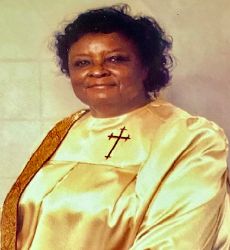 Apostle Martha Young, Founder and Pastor of Deliverance Tabernacle, Long Branch, NJ completed her earthly assignment and made her triumphantly transition to glory on November 13, 2021. Assuredly the gates of Heaven was opened and the angels rejoiced at her arrival.

Martha Young, affectionately known by her very close family as "Sally," was born on January 2, 1937, in Chowan Co., North Carolina to her late parents Martha and Roosevelt Palmer.

Apostle Martha Young accepted the Lord Jesus Christ as her personal Savior in 1977 and became a member of the Deliverance Ministry of Faith Fellowship, Asbury Park, NJ under the leadership of the late Bishop Curtis Jones, Pastor. While diligently working in the church she became a Christian Missionary as well as the Church Treasurer in 1979.  In 1982, she was licensed as a Minister.

In 1983, under the direction of the late Dr. Nathaniel Screvens, then President of the Evangelical Bible Institute, Newark, NJ she entered the institute and earned a Diploma in Christian Education and a Certificate in Evangelism in 1987.  In 1988, Apostle Martha Young was ordained as Pastor of the Deliverance Ministry of Faith Fellowship and served devotedly to the ministry until 1992.  Upon completing her calling at Deliverance Ministry of Faith Fellowship, it was laid upon her heart to establish Deliverance Tabernacle in Long Branch, NJ.

While serving in the ministry, Martha Young was employed by General Motors, North Brunswick, NJ.  After 20 years of employment initially as a Computer Operator and then as an Office Manager, she retired in 1992.  After retiring from General Motors, she decided to continue to work part-time as a Certified Home Health Aide for Family & Children's Service in 1996.

In 1993, Apostle Martha Young joined the Universal Evangelistic Missionary Workers, Inc. organization under the direction of the late President Dr. Minnie L. Burns.  At that time, she served as the President of the Asbury Park, NJ location and later elevated to serve as the National Vice President for the entire organization. There were four locations: Plainfield, NJ, Asbury Park, NJ, Englewood, NJ and Saratoga Springs, NY.

Apostle Martha Young dedicated her life to teaching, preaching God's Word, and ministering to all who crossed her path to lend an ear and have a desire to want to know our Lord & Savior Jesus Christ.  She never found herself too busy to share her wisdom, compassion, and love toward others.  Apostle Martha Young has birthed many spiritual sons and daughters into the body of Christ.  She was bold enough to go beyond the boundaries, courageous enough to uphold Godly standards, obedient enough to speak what God said and loving enough to share her life, heart, and spirit to all.  As the scripture declares, I have fought a good fight, I have finished my course, I have kept the faith. - II Timothy 4:7."

She is preceded in death by her husband Dennis Joseph Young, brothers Zion Palmer, Theodore Palmer and Adam Palmer.

She was devoted to her family and leaves to cherish her profound legacy and memories with her brother Rev. James Palmer, daughter Barbara Young-McCleave, son-in-law Shannon McCleave, son Allen Dwayne Saunders, 6 grandchildren, 3 great-grandchildren and a host of nieces, nephews, cousins, and friends.