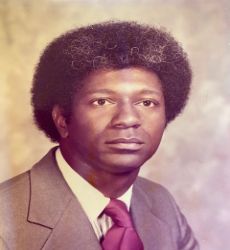 Oscar Sheppard II, son of the late Oscar Sheppard Sr. and Flossie Mae Allen was an only child born on June 7, 1942 in Moultrie, Georgia.

Oscar affectionately known as "Sugar Pie," "Shep," and "Big O" by family and friends attended the public schools of Colquitt County, Georgia.  He graduated from William Bryant High School of Moultrie, Georgia.  Oscar furthered his education at Hampton University in Hampton, Virginia where he was Vice President of Kappa Alpha Psi Fraternity Inc., graduating with an Honor's Degree in the Division of General Studies.

Oscar departed this life on January 15, 2020 at the CentraState Medical Center, in Freehold, NJ after fighting a courageous battle with Alzheimer's disease.  Oscar was an avid outdoorsman.  He had an infectious smile and great sense of humor.  Oscar was a great dancer who loved music.  He was an admired, respected and loyal friend to all those who knew him.  He accepted Christ at an early age attending Willow Grove Baptist Church, Moultrie, Georgia and later fellowshipped at the Emmanuel Baptist Church of Somerset, NJ.

Oscar started his career at Prudential Insurance Company as a Sales Producer out of Newark, NJ.  He later retired from Johnson & Johnson of New Brunswick, NJ as an IT Professional after 38 years of service.

Oscar met the love of his life Joyce M. Sheppard in New Brunswick, NJ, also an employee at Johnson & Johnson and they were joined in holy matrimony on May 14, 1977.  They raised two sons Shannon D. Sheppard, born October 4, 1977 and Dustin C. Sheppard, born September 23, 1980.  They resided in Piscataway, NJ and later moved to Hillsborough, NJ until their retirement.  They went on and moved into an adult community in Jackson, NJ.  There, Oscar was involved in many of their community activities such as bowling, bocce, social dancing, social club, mens club activities, bus trips and much, much more.

In combination with his love for sports, Oscar had a tremendously competitive spirit.  A passionate supporter of his boys, Oscar was an attendee at every game they ever played.  Oscar also loved spending time with his five grandchildren always attending their sports activities, going on vacations and celebrating birthdays just to name a few.

Oscar had an insatiable love for seafood.  One of his favorite dishes was Seafood Fra Diavolo, a combination of shrimp, oysters, clams and scallops over pasta marinara.  Whenever we went out to eat, Oscar would always check the seafood dishes before making his selection.

Oscar will be sorely missed.  He made the world and those around him a more compassionate place.  His genuine kindhearted nature touched family, friends and colleagues in such an impactful way.  Rest in peace Oscar, we love you.

In lieu of flowers donations can be made to the Alzeheimer's Association.