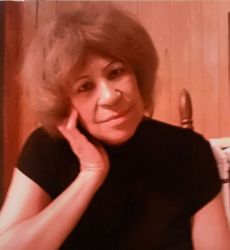 Pearlie Mae Butler Smith was the third child born to proud parents Otis and Roberta Butler on May 30, 1937, in Shreveport, LA. She accepted Christ at an early age and was baptized at First Baptist Church in Plain Dealing, LA.

She completed her primary and secondary education and after graduating salutatorian from Carrie Martin High School in Plain Dealing, LA she pursued higher education at Southern University where she obtained her undergraduate degree in Home Economics/Chemistry. Being not only an advocate, but a practitioner of lifelong learning she furthered her education at the University of Minnesota, St. Paul and Kean State College.

She enjoyed a long and distinguished tenure in the Asbury Park School system and was well respected by her superiors and coworkers alike. Already a local legend of sorts, she was ceremoniously recognized as such in 2015 as an Asbury Park School District Legend along with eight of her contemporaries for her undying and tireless loyalty and dedication to the district and its youth whom she so ardently championed.

Though proud of her Baptist roots, she converted to Catholicism later in life and was a long standing and proud parishioner and supporter of Our Lady of Mt. Carmel Church (Mother of Mercy) in Asbury Park, NJ. Her personal values shown through in many aspects of her life. Giving endlessly of herself to others whether through personal time and effort, finances or otherwise, was a hallmark of her character. She was a tireless protector and advocate for children. Visitors to her home were always assured to be welcomed with warm smiles, delicious meals, hours of stimulating conversation and a comfortable place to rest for the night, or several if need be. Her home served as a gathering hub for family and friends producing generations of camaraderie and warm memories.

She was preceded in death by her parents Otis and Roberta Butler, brother Jewel Butler, sister S. Rae Greene and sister Otis Taylor.

Pearlie departed this life on the evening of December 22, 2021, in the comfort of her home with her son by her side. She leaves to mourn and cherish her memory three children Kimberly (Michael) Meyer of Neptune City, NJ, DeVonn (Christina) Smith of Keyport, NJ and Scott Smith of Neptune NJ; sister Doris B. Roberson of Plain Dealing, LA; grandchildren Simone (Will) Holland, Ramon Torres III, DeVonn Smith Jr., Milana Smith and Michaela Meyer; special family and friends Norma Smith, Dr. Geraldine Ellison, Minnie Prince, Mozelle Philpart and Phyliss Baron along with a host of family and friends who will miss her dearly.