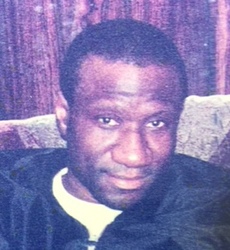 Our beloved brother and uncle Randy Gibson passed away on April 1, 2019 after a long battle with his failing health.  Randy was born in Long Branch on November 20, 1967 to the late Nancy Gibson and Lonnie Sanford.

Randy took pride in being strong and independent; thus he rarely spoke about his health.  Randy believed in a strong work ethic;  he did not like being unemployed.  Also Randy studied business administration at Fordham University in the Bronx, New York.

Randy enjoyed quiet moments alone relaxing and watching his favorite television shows.  He particularly liked the television show Power.  He also liked horseracing, whether watching it on television or going to live racing at the racetrack.  Randy started working with horses as a teenager and often worked with them when they came to Monmouth Park.  Randy also liked watching Tiger Woods, especially when Tiger was in contention to win.  It was important to Randy to stay in touch with our maternal Aunt Louise; they talked often.

Randy was preceded in death by his beloved mother Nancy Gibson and his father Lonnie Sanford.