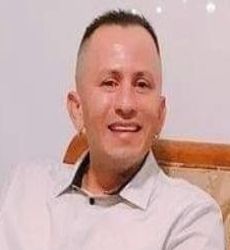 Rene Ricardo Jimenez Campos, age 45, formerly of Long Branch NJ passed away Tuesday August 16,2022. He was born May 10, 1977 in El Salvador. He was the youngest of two. Rene grew up in Alegria, Usulutan with his grandmother and sister where he also attended school. Years later he moved to Tecapan, Usulutan where he worked at a family owned bakery where he grew up with his cousins.

At the age of 24, Rene moved to the United States where he worked in many different places such as restaurants, construction, mover and his most recent occupation of taxi driver for Shore Cab taxi service where he worked with his best friend Omar. At 30 years of age, Rene became a father for the first time and had two lovely children which he loved dearly. He lived in Long Branch with his father for 20 years and their two cats Gaspar and Chiquita.

He is survived by his two children, his father Juan Campos, his mother Blanca, his sister Veronica Jimenez Campos, his grandmother Angela Vasquez, his two nieces and nephew, his two aunts Cecilia Parada and Rosa Campos and numerous aunts, uncles, cousins and friends.