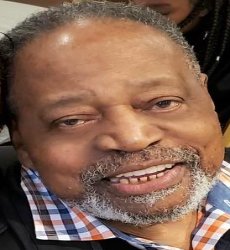 We were blessed by the presence of Rev. Arnold F. Jeter for eighty-two years; from his birth on February 28, 1939, in Steubenville, Ohio, to his passing on January 1, 2022. The son of John F. and Elizabeth Mills Jeter, he grew up attending Emmanuel Church of God in Christ. He eventually became their choir director, his distinctive singing voice ringing out harmoniously during the various church services. In Ohio, Rev. Jeter also began his athletic activities, playing football and baseball for the “Big Red”, Steubenville High School, where he graduated from in 1957. His budding relationship with both God and athletics would significantly shape his life.

While at NJCU, Rev. Jeter became involved in community outreach and extracurricular initiatives. Due to his commitment to the Lord, he started a Fellowship of Christian Athletes “Huddle” at NJCU. He contributed his talents to reading and tutorial programs at the A. Harry Moore School for the physically and emotionally challenged; The Early Childhood Learning Center and in Jersey City public schools.

Aware and attentive to his calling, Rev. Jeter allowed the Lord to use him. On March 20, 1994, he had re-dedicated his life to the Lord and was ordained as a deacon on September 3, 1995. He attended Eastern Bible College, Somerset Christian College and Hampton University Minister’s Conference. Rev. Jeter also became certified in Expository Preaching through the E. K. Bailey International Preaching Conference and later earned a certificate of Christian Ministry from Pillar College.

In 1999, God called him to preach the gospel and on July 11th, Rev. Jeter gave his Trial Sermon at Zion Hill Baptist Church, in Piscataway, NJ. He was later ordained there, on April 28, 2002 and became their Associate Pastor. At Park Avenue Christian Church in East Orange, NJ, he went on to become the Director of the Men’s Ministry, chaired the Education Ministry and was a Sunday School teacher of Men’s Bible Study. However, dearest to his heart was his work in Prison Ministry. He worked with the NJ Department of Correction through the Chaplaincy Network Program and often share poignant stories of lessons learned. For his tireless work in this Ministry, Rev. Jeter was awarded the 2008 HANDS Community Leadership Award. In 2014, he and his wife were also awarded the Volunteer of The Year, by the New Jersey Department of Correction for their service at Mid-State Correctional Facility.

Rev. Jeter was currently a beloved Associate Minister at Pilgrim Baptist Church in Red Bank, NJ where he was the Director of Christian Education, instructor for Adult Sunday School and facilitator of “Man to Man” Christian Fellowship. He was an invaluable presence, a wonderful spiritual leader and great friend to many. His knowledge of the Word, keen sense of humor and relatable humanity, drew many more to God. Even with a full complement of commitments, Rev. Jeter also worked with the boy’s mentorship program at Lunch Break, in Red Bank, NJ. Those who were blessed to glean from his teachings, could only be the better for it. Rev. Jeter said it best himself, “Even though I’ve had some mountain top experiences and some valley experiences, through it all God has been good to me. The highest calling that a man can have is preaching the gospel.”

“I can do all things through Christ which strengthen me.” -Philippians 4:13

“He looked beyond my faults and saw my needs”