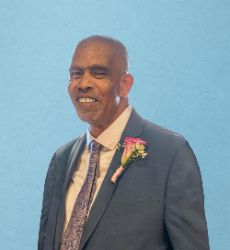 Robert had a strong work ethic and started his restaurant career in his late teens working at Nunzio's Pizzeria in Long Branch.  While in Albany he managed the Schuyler Inn, a hotel with banquet and conference room facilities.  He held numerous jobs after returning to New Jersey.  He was most recently employed at UPS.  He experienced joy showing up everyday ready to work.

Although life was not always easy for Robert, he maintained a positive outlook.  When faced with liver disease, Robert bravely met this challenge as well, receiving a transplant in August 2018.  One of his proudest moments was walking his daughter, Danielle down the aisle on her wedding day, just three months after surgery.  Just as the pandemic began, his joy increased when he welcomed his first grandchild.  Shortly thereafter, he met the love of his life, Roxanne, whom he married in September 2020.  These were among the happiest days of his life.

George had a passion for cars and was an exceptional chef.  He enjoyed cooking for family and friends.  He had a genuine smile and was transparent, passionate and honest.  George was a beautiful human being.

He was predeceased by his father Robert "Bunk" Towler Sr.

A loving husband, father, grandfather, brother, uncle and son, Robert will be greatly missed by all who loved him.